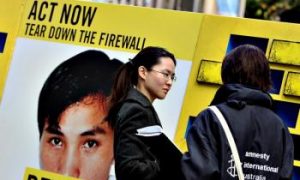 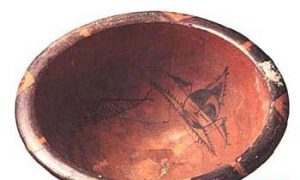 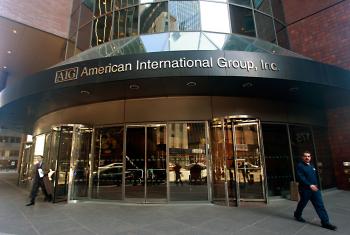 ON THE MEND: American International Group (AIG) offices are seen in New York City in this file photo from 2009. AIG, once considered too large to fail, is trying to get back on its feet. (Photo by Mario Tama/Getty Images)
Business

American International Group Inc. (AIG), one of the companies considered too large to fail, which survived only because of a government bailout paid out from taxpayers funds, is trying to get back on its feet.

At the beginning of March, AIG paid the Treasury $6.9 billion, after selling all MetLife Inc. common shares, which it had received after selling its American Life Insurance Co. to MetLife in 2010.

AIG published that its gross proceeds from the sale, before expenses, which included fees by the banks that handled the sale of MetLife stock, amounted to around $9.6 billion.

In an effort to become leaner, AIG is in negotiations to sell Nan Shan Life Insurance Co. Ltd. for $2.16 billion. Toward the end of 2010, AIG sold 80 percent of American General Finance Inc., retaining a 20 percent ownership.

AIG’s “restructuring did result in some asset sales. … But once it became clear that we didn’t
need to dismantle AIG to repay our obligations, a foundation was laid for the recapitalization of the government’s ownership of the company,” said Robert H. Benmosche, president and CEO at AIG, in the 2010 Letter to Shareholders.

The company’s structure has become leaner, which allows for more transparency and better oversight. The U.S. government will be able to sell its equity holdings in AIG for a profit, benefiting the American taxpayers.

Most of all, the company was able “to emerge as a financially strong, redefined, stand-alone company,” Benmosche said.

As of date, the Treasury, on behalf of the U.S. government, holds a little more than 92 percent of AIG’s common stock and $11.3 billion in preferred stock.

As of January, AIG’s financial viability showed improvement and was largely stable, but only because of the government bailout, noted the U.S. Government Accountability Office (GAO) in its Status of Programs and Implementation of GAO Recommendations, released mid-March.

“That cost [$25 billion] stems largely from assistance to American International Group (AIG), aid to the automotive industry, and grant programs aimed at avoiding foreclosures,” according to the November 2010 CBO report.

In March, the CBO revised its November estimate downward to $19 billion, including $14 billion for the AIG bailout.

Any gains or losses to the U.S. government will depend on AIG’s financial well-being at the time when Treasury sells the AIG stock. For the government to break even, it would have to earn $28.72 a share.

“The government’s prospects for recouping the assistance it has provided largely rests with the return that Treasury earns when it sells its common stock in AIG,” according to the GAO Recommendations testimony before a U.S. Senate committee, released in March.

Japan’s natural disaster could conceivably turn into another nail in the coffin of AIG, despite their financial wherewithal looking more upbeat.

The Japan Earthquake Reinsurance Company (JERC) is the exclusive provider in Japan of earthquake coverage for personal properties. AIG has established a $500 million reserve in Japan for earthquake-related losses to personal dwellings.

“The JERC then shares the risk between the JERC itself, the government, and private general insurance companies through a reinsurance arrangement. The JERC only covers earthquake damage to personal property, not commercial risk, and is the only company authorized in Japan to reinsure personal property,” according to a recent AIG press release.

Despite U.S. Generally Accepted Accounting Principles (GAAP) barring the setup of catastrophe reserves, AIG believes that it will not be affected materially, as the maximum amount of losses it can incur is $575 million.

“These deposits will be utilized to pay earthquake claims on personal dwellings, thereby reducing the impact on the liquidity of the operations,” according to a recent AIG press release.

Considering the financial wherewithal of AIG, “I would not call [the bailout] a success,” said Kent Smetters, professor at the Wharton School, in a recent Knowledge@Wharton (KW) article.

Smetters fears that the bailout of AIG, which in the end may be profitable for the American taxpayer, may have set a precedent for future economic failures of large companies, making them too big to fail. Fearing a domino effect, Smetters is concerned that the government has signaled that it “will step in to help in a crisis involving a big firm connected to others, making it easier for companies to continue taking unsound risks,” according to the KW article.

Academia can’t be pinned down when it comes to the necessity of the AIG bailout as such an action is unknown. They argue that when Lehman Brothers was allowed to be taken over, the resulting activities didn’t create any upheaval.

Here was a company truly in trouble, while with AIG, only a small section based in London was in trouble during the economic crisis. The company’s insurance sector was healthy, and no bailout would have been needed.
“In the AIG case … it was only the derivatives business that appeared to pose a risk to other firms; the more mundane insurance operations were sound,” according to the KW article.

The professors intimate that a government bailout should be used only when it comes to consumer protection and only when absolutely necessary. For sophisticated investors that understand the value of due diligence, such an action precipitates risk taking without having done one’s homework.

“Looking back at the AIG bailout, a June 2010 report by a congressional panel concluded that the Federal Reserve Bank of New York had given too little consideration to alternatives. Critics said the government erred in allowing AIG’s counterparties, including banks that bought its mortgage derivatives, to recover all that they were owed by the firm,” advised the KW article.