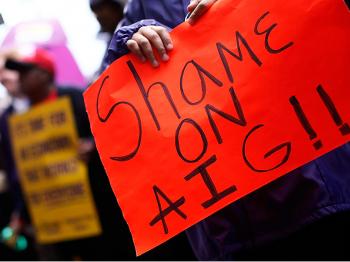 The fourth-quarter loss was narrower than last year’s, when the insurance company narrowly avoided bankruptcy and was supported by the Federal Reserve Bank of N.Y. (FRBNY) and U.S. Treasury in separate bailouts totaling $182 billion. In fourth quarter of 2008, AIG lost $61.7 billion, the largest single-quarter loss in U.S. corporate history.

But after two quarters where the company seemed to have pulled itself together, its fourth quarter 2009 results were ugly. AIG reported $6.2 billion in expenses related to paying back its government debt, and weaker premiums revenues from its general insurance business.

Some of the losses were attributed to expenses incurred in the process of selling off company assets to pay back its debt burden. AIG is currently in talks with MetLife Inc. to sell its American Life Insurance Co. subsidiary for as much as $15 billion.

“As a result of reducing our debt to the FRBNY, during the fourth quarter we incurred certain losses associated with this debt reduction,” said Robert Benmosche, company president and chief executive officer, in AIG’s earnings release. “We are increasingly confident in how we see the mix of AIG's businesses over the long term.”

Once one of the world’s largest and most-respected companies, AIG’s fall has been stunning. Its near-demise was triggered by the global financial crisis, causing massive redemptions on certain derivative securities—called credit default swaps, or CDS—underwritten by its Financial Products arm.

In exchange for emergency bailout, the U.S. government is now 80 percent shareholder in the company. But for now, the company isn’t in the most hurry to repay all of it.

“Several media sources said a plan to give the Federal Reserve Bank of New York securitization notes of up to $8.5 billion representing embedded value of certain of its U.S. life insurance businesses to pay down its loan has been abandoned,” wrote 24/7 Wall St. columnist Douglas McIntyre. “This may help the firm’s balance sheet but it is a slap at taxpayers.”

According to research by Bloomberg, AIG’s employee totals have dropped by roughly 20,000, or 17 percent, from the beginning of the year. Part of the reason for the drop is through divestitures—AIG today is a much smaller company that it once was, as 20 businesses were sold or spun off in 2009.

Another reason for the belt-tightening is an exodus of employees. Bloomberg data found that more than 60 AIG managers have left AIG voluntarily since its bailout in September 2008, which many bringing their subordinates.

The main reason for the exodus is pay restrictions by Kenneth Feinberg, President Barack Obama’s special master of compensation for all companies receiving TARP funding. As AIG is still very much government-owned, all compensation and bonus payments must be approved.

AIG has been the subject of criticism from lawmakers and pundits for its bonus payments. On Feb. 3, AIG distributed around $100 million in bonus payments, most of which were guaranteed bonuses that were in place prior to the company receiving its bailout.

But the government and the company have little recourse. As long as AIG stays in business, it is legally required to pay the amounts. Also, the company has argued that it must reward its employees competitive pay packages to retain top talent necessary to return the company to health and repay U.S. taxpayers.