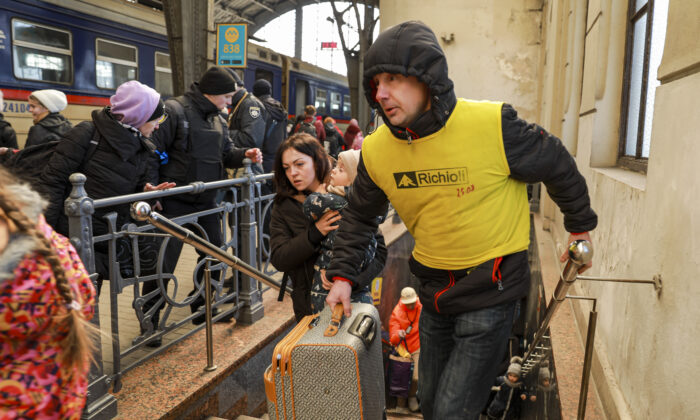 A volunteers helps carry luggage for Ukrainian refugees as they prepare to board a train to Poland at the train station in Lviv, Ukraine, on March 18, 2022. (Charlotte Cuthbertson/The Epoch Times)
Russia-Ukraine War

Volunteers seeking to aid some of the 3 million refugees coming across the border from Ukraine are experiencing anguish themselves, a trauma therapy counselor told The Epoch Times on March 15.

“It’s essential that volunteers who have little or no experience dealing with traumatized adults and children get ready for what they’re about to see,” said MaryDale Salston, who has worked for years in post-traumatic stress counseling.

“Volunteers will be traumatized, too, and definitely impacted by the brutality of the stories they hear. They need to be prepared to manage their responses and remain calm to be effective.”

Salston has worked as a trauma counselor during the San Francisco earthquake of 1989, the Oklahoma City bombing of 1995, and hurricane disasters in Florida where people’s homes were destroyed.

She has also led groups of patients who were survivors of violent crimes and those who have had family members murdered.

There are some simple steps nonprofessionals can take to be more effective, Salston said.

“Step one is that volunteers should not forget to breathe slowly, deeply, in and out. Remain calm. Don’t react to what you see with jaw dropping or eyes rolling,” she said.

“People facing life and death stress situations stop breathing normally. They clench down and breathing becomes shallow, or they just hold their breath. Volunteers will experience that as well as they encounter shaken people and children.”

There are “identifiers” that volunteers staying for extended periods will see.

“Thirdly, there are delayed-onset symptoms where at least six months have passed since people experienced the trauma and onset of symptoms.”

Some refugees will cope via persistent avoidance, experiencing a restricted range of emotions.

“They will not be able to be as loving, thoughtful, or concerned for others as they were,” she said. “There are people who formerly could laugh easily, and all that shuts down. They were able to have empathy for somebody, but can’t any longer.”

“That’s where people are on guard all the time because of the traumas they’ve experienced,” Salston said. “Coupled with that can be the exaggerated startle response. Simple sounds—like a book dropping or a car backfiring—cause people to be startled, a symptom not present before the trauma.”

Not all responses to traumatic stress are negative, she said.

“I once did a survey of individuals asking how trauma impacted their daily lives. I was surprised to find that in every case, the narrative was how they had been impacted in a positive way,” she said.

“Responses such as ‘My family has been there for me,’ ‘I have developed better relationships with friends who have gone through this,’ or ‘My relationship with God is stronger.’”

Volunteers shouldn’t be overwhelmed by the sheer number of refugees in need of help.

“I always have hope that if a volunteer is reaching out, even to just a few people, that this will eventually have a positive impact on a larger number,” Salston said. “A colleague and I led a homicide survivors’ group of 30, and they ended up doing all the work. We may have led the topic, but they were the ones helping each other.

“When they read of a homicide in the paper, they would write a letter to the survivors and say, ‘You should come to this group. It’s going to help you.’ They helped each other a great deal. If the volunteers to Ukraine can promote that—helping each other rather than a professional doing it all—that would have a powerful impact.”

Prayer is important, she said.

“We need to pray for volunteers for guidance and good leadership,” she said. “That’s what we can do for them here as they are going over there.”