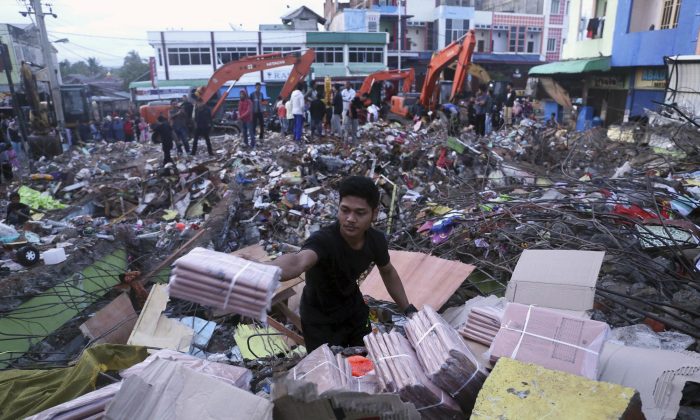 A man salvages printed materials from under the rubble of a shop at a market in Meureudu, Aceh province, Indonesia, on Dec. 8, 2016. (AP Photo/Heri Juanda)
International

MEUREUDU, Indonesia—Humanitarian organizations descended on Indonesia’s Aceh province Thursday as the government promised tons of emergency aid and officials raced to assess the full extent of damage from an earthquake that killed more than 100 people.

Volunteers and nearly 1,500 rescue personnel concentrated their search on the hard-hit town of Meureudu in Pidie Jaya district near the epicenter of the magnitude-6.5 quake that hit before dawn Wednesday. Humanitarian assessment teams fanned out to other areas of the district.

National Disaster Mitigation Agency spokesman Sutopo Purwo Nugroho said the death toll had risen to 102 and warned it could increase. Search teams were using devices that detect mobile phone signals within a 100-meter (yard) radius to help guide their efforts as they scoured the rubble, he said. Aceh’s disaster mitigation agency said more than 600 people were injured.

Those killed included very young children and the elderly. Mohammad Jafar, 60, said his daughter, granddaughter and grandson died in the quake but he was resigned to it as “God’s will.”

He was getting ready for morning prayers when the earthquake hit. He said he and his wife managed to push their way out through the debris. Another man said he found his 9-year-old daughter alive beneath a broken wall at his neighbor’s house.

Thousands of people are homeless or afraid to return to their houses. Officials in Aceh said more than 8,000 people spent Wednesday night in shelters in Pidie Jaya district alone.

Killer quakes occur regularly in the region, where many live with the terrifying memory of a giant Dec. 26, 2004, earthquake that struck off Sumatra. The magnitude-9.1 quake triggered a devastating tsunami that killed more than 100,000 Acehnese.

The military is setting up an emergency field hospital and sending two dozen doctors, and the Health Ministry is deploying a medical team and sending medicines. The Red Cross sent aid such as water trucks on Wednesday and humanitarian group CARE is leading an assessment team of four international aid groups to avoid duplication of efforts. Aid groups and others are also appealing for donations.

“Every aid and civil society organization is piling into the area with as many boxes of rice, instant noodles, blankets and other aid as they can shift,” said Paul Dillon, a spokesman for the International Organization for Migration, which has an assessment team in northern Aceh.

It will take at least two more days before there’s a fuller picture of how many people are displaced and the relief effort required, he said. On Twitter, the IOM said one mosque was sheltering 2,000 displaced women and children.

The U.S. Geological Survey said the earthquake was centered about 19 kilometers (12 miles) southeast of Sigli, a town near the northern tip of Sumatra, at a depth of 17 kilometers (11 miles). It did not generate a tsunami. As of 9 a.m. Thursday, some 36 aftershocks had rattled the area.

The world’s largest archipelago, Indonesia is prone to earthquakes due to its location on the Pacific “Ring of Fire,” an arc of volcanoes and fault lines in the Pacific Basin. The 2004 quake and tsunami killed a total of 230,000 people in a dozen countries, most of them in Aceh.

John Ebel, professor of earth and environmental sciences at Boston College, said there is a risk that even weak aftershocks could cause further damage to buildings, particularly because modern building codes aren’t consistently enforced in Indonesia.

Scores of rescuers and giant excavators worked away at the debris of a market in Meureudu, the hard-hit town, where many shop houses collapsed.

One shop owner, Hajj Yusri Abdullah, didn’t hold out much hope of finding survivors. He said nearly two dozen bodies were pulled from the market debris the day before. They included a group of eight consisting of a newlywed couple and family members holding an ornate celebration known as Antar Dara Baro.

The national disaster agency said nearly 600 buildings were severely damaged or destroyed in the districts of Pidie Jaya, Pidie and Bireun. Most were shop houses or dwellings but mosques, a hospital, boarding schools and a shopping center also sustained damage. Roads also cracked and power poles toppled over.