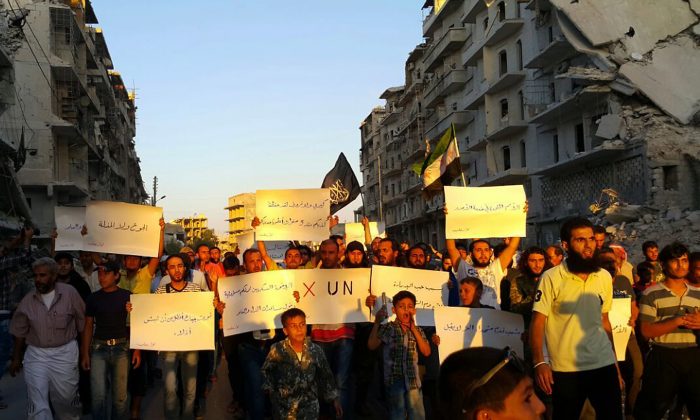 Activists in Syria’s besieged Aleppo protest against the United Nations for what they say is its failure to lift the siege off their rebel-held area, on Sept. 13, 2016. Dozens of protesters marched in al-Shaar neighborhood heading toward the Castello road, the area from which aid is expected to be delivered. “Hunger better than humiliation,” one banner read. “X the UN,” another read. (Modar Shekho via AP)
Middle East

BEIRUT—Trucks carrying humanitarian aid to Syria’s besieged rebel-held part of the city of Aleppo were held up for yet another day as heavy fighting broke out Friday on the edges of Damascus between government forces and insurgents.

The clashes were some of the most serious since a U.S.-Russia-brokered cease-fire went into effect this week. The fighting and mutual accusations of violations sparked concern that the fragile cease-fire, which brought some relief to millions of people across the war-ravaged country, may be starting to fray.

In a further sign of tensions picking up, the Obama administration warned Russia that potential military cooperation in Syria will not happen unless humanitarian aid begins to flow into Aleppo and other besieged communities.

US to Shift Military Assets to Syria Under Deal

In Long and Bloody Syria War, This Truce May Be Different

The Russian military had said that the Syrian army withdrew its armor, artillery and other weapons from a key highway near Aleppo early Thursday, signaling the possible arrival of aid convoys after several days of delay. Syrian state TV said bulldozers began clearing the road on the northwestern edge of Aleppo that leads into besieged rebel-held neighborhoods to make way for the convoys.

But a Russian official, Lt. Gen. Vladimir Savchenko, said the Syrian army Friday moved its heavy weapons back to Castello Road after the opposition failed to withdraw their arms in sync in line with the truce deal.

In a video call from Castello Road, Russian Col. Sergei Kapitsyn said the rebels fired on government positions overnight, wounding two Syrian soldiers and prompting the Syrian army to move their weapons back to the road to prevent the rebels from advancing.

In a Friday phone call, U.S. Secretary of State John Kerry told Russian Foreign Minister Sergey Lavrov that Moscow must use its influence with the Syrian government to get the aid moving, adding that delays in the assistance had been “repeated” and “unacceptable.”

Kerry told Lavrov that unless the aid is delivered, the U.S. will not move ahead with the formation of a joint facility with Russia to coordinate attacks on terrorist groups and share intelligence.

Sustained delivery of humanitarian aid, along with a decrease in violence, is a requirement for that cooperation under an agreement Kerry and Lavrov reached last week.

If the aid starts flowing and the cease-fire holds, the expectations are that such a climate would pave the way for the restart of Syria peace talks that collapsed earlier this year.

Lt. Gen. Viktor Poznikhir of the Russian military’s General Staff declared a readiness to extend the cease-fire for another 72 hours, adding that Moscow expects Washington to take “resolute action” to end violations by the U.S.-backed opposition units to prevent the situation from “spinning out of control.”

At the United Nations, the U.S. and Russia called for a meeting of the Security Council to discuss the situation in Syria. The council was to hold closed consultations later Friday.

The development comes after Russia’s Ambassador Vitaly Churkin said Thursday that he hoped the Security Council would adopt a resolution endorsing the cease-fire deal at next week’s high-level General Assembly. Lavrov has said that Russia would like to publish details of the cease-fire deal he hammered out with Kerry last week but that there are U.S. objections to such a move.

Earlier Friday, a Syrian opposition monitoring group reported that Russian troops deployed along the Castello Road, which would mark the most overt participation of its ground forces in the Syrian war and underline Moscow’s role as a major power broker. Russia intervened with its air force on the side of Syrian President Bashar Assad’s government last year, turning the tide of the war in his favor.

A main opposition group, the Syrian National Coalition, said it rejects the presence of a “Russian occupation” force on the road and that U.N. peacekeepers should run the operation. The Russian Defense Ministry only mentioned that it had military observers on the road and said nothing about troop deployment.

Aleppo-based activist Bahaa al-Halaby said humanitarian conditions in the eastern neighborhoods of Syria’s largest city are deteriorating. “There are wounded people and others who need food,” he said.

The Syrian government, meanwhile, accused insurgents of firing a rocket that hit a church in the government-held side of Aleppo, causing material damage but no casualties.

Meanwhile, hours-long fighting and shelling that erupted in neighborhoods on the edges of Damascus on Friday were the heaviest in the Syrian capital in weeks, according to activists and residents. Insurgents shelled government-held areas in the eastern Damascus neighborhood of Qaboun, wounding three people, Syrian state media said. SANA said the shelling violates the cease-fire.

The Britain-based Syrian Observatory for Human Rights said the fighting between government troops and rebels is concentrated in the neighborhood of Jobar, next to Qaboun, where rebels have had a presence for years.

Mazen al-Shami, an opposition activist near Damascus, said government forces tried to storm Jobar but were repelled by opposition fighters. Al-Qaida and Islamic State group militants, who are excluded from the cease-fire, are not present in the area, he said.

“This is one of the most serious violations of the cease-fire,” al-Shami said via Skype.

SANA accused the insurgents of launching the attack, triggering retaliation by government forces.

Dmitry Peskov, a spokesman for Russian President Vladimir Putin, said Moscow is using its influence on the Syrian government to make sure the cease-fire holds and wants the United States to do the same with regards to opposition groups.

U.N. officials said they were awaiting word from Russia and Syrian combatants on both sides that security and monitoring are in place to allow for deliveries of humanitarian aid into rebel-held parts of Aleppo city.

Speaking to reporters in Geneva, OCHA spokesman Jens Laerke said U.N. officials are waiting for assurances that conditions are safe enough for convoys to proceed from Turkey to eastern Aleppo. Laerke said the trucks are in a “special customs zone” on the Turkish border.