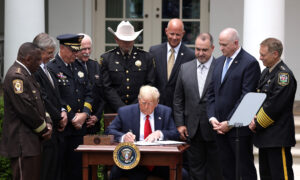 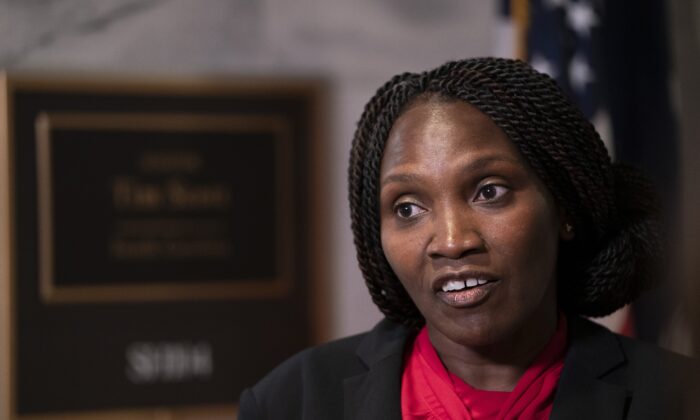 President Donald Trump showed compassion during a meeting at the White House, the mother of Ahmaud Arbery said.

“He was very compassionate, he showed major concerns for all families,” Wanda Cooper-Jones said during an appearance on Fox News’s “Special Report” late Tuesday.

“I can say that President Trump was very receiving. He listened and he addressed every family accordingly,” she added.

In response, Trump said in a social media post that Cooper-Jones is “a GREAT woman.”

“Her son is looking down from heaven & is very proud of his wonderful & loving mom!!!” he wrote.

Cooper-Jones said in a separate appearance on “CNN Tonight” that she hoped Trump gathered that her son was loved.

“And not only Ahmaud was loved, but all the lost young men that we’ve lost due to these types of tragic events, they were loved as well,” she said.

Arbery, 25, was jogging in Glynn County, Georgia, in February when two men who subsequently said they thought he looked like a burglary suspect gave chase and shot him dead.

The men, former police officer Gregory McMichael, 64, and his son Travis McMichael, 34, were later arrested and charged with murder.

Trump met with families of people killed by gunfire, primarily during interactions with police officers.

Relatives of Botham Jean, a Dallas resident killed by a police officer who mistook his apartment with hers; Antwon Rose, a 17-year-old fatally shot in Pittsburgh in 2018 by an officer who was later charged with homicide; and Cameron Lamb, who was fatally shot in his backyard by a police detective in Kansas City, were among the others at the meeting.

After the meeting, the president signed an executive order that includes measures meant to reform police agencies.

The order includes requiring police agencies to reform their rules surrounding when force is used if the agencies want to receive certain federal grants.

“Many of these families lost their loved ones in deadly interactions with police. To all of the hurting families, I want you to know that all Americans mourn by your side. Your loved ones will not have died in vain,” he added later.

“We are one nation. We grieve together, and we heal together. I can never imagine your pain or the depth of your anguish, but I can promise to fight for justice for all of our people.”

A commitment made during the meeting will be pursued strongly, Trump said.

Cooper-Jones told reporters on Capitol Hill that she doesn’t think the order goes far enough. “But I do think that is a start,” she said.

Trump’s meeting was held behind closed doors and none of the family members joined him during the signing ceremony.

The decision on families not attending the signing was mutual, Ja’Ron Smith, deputy assistant to the president, said in a gaggle later in the day with reporters on the White House driveway.

“It really wasn’t about doing a photo opportunity. We wanted the opportunity to really hear from the families and protect them,” he said.

Trump “really wanted to listen to them and have a safe place and make it about listening to them more so than having a photo opportunity,” Smith added.

The commitment Trump referred to was to make sure there’s justice for each case, Smith said. The families had input into the order and different parts of the mandate deal with some of the situations the deceased persons were in.