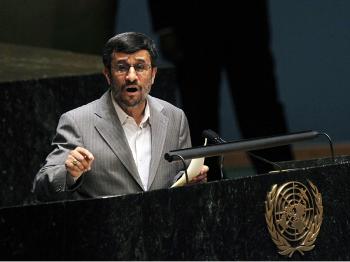 Iranian President Mahmoud Ahmadinejad speaks at the United Nations 2010 High-level Review Conference of the Parties to the Treaty on the Non-Proliferation of Nuclear Weapons at U.N. headquarters May 3, 2010. (Mario Tama/Getty Images)
Middle East

Iran’s hardline president Mahmoud Ahmadinejad fiercely denied that his country was attempting to build a nuclear weapon and railed at the United States for being the world’s biggest threat to peace.

The issue of Iran’s nuclear program dominated the first day of talks at a month-long United Nations conference designed to strengthen the Nuclear Non-Proliferation Treaty (NPT).

In his opening address, the U.N. Secretary General, Ban Ki-moon, said that Tehran needed to cooperate with the International Atomic Energy Agency (IAEA) to dispel fears of its nuclear program.
“The onus is on Iran to clarify the doubts and concerns about its program,” Ban told delegates of 189 countries.

“Regrettably, the government of the United States has not only used nuclear weapons, but also continues to threaten to use such weapons against other countries, including Iran,” Ahmadinejad said.

The Iranian president was referring to a provision in the U.S. Nuclear Posture Review—which leaves open the option of a nuclear strike against rogue states.

Ahmadinejad is the only head of state involved in the talks, and his attendance at the event is designed “to divert attention and confuse the issue,” said U.S. Secretary of State Hillary Clinton.
“We’re not going to permit Iran to try to change the story from their failure to comply” with the NPT, she said on Sunday’s “Meet the Press” on NBC.

In his speech, Ban lambasted Iran for failing to “fully comply with Security Council resolutions” over the country’s claim that it had already begun to enrich its own uranium.

Officials have accused Tehran of failing to reply to a potential solution to the crisis, which would see Iran’s uranium stocks being sent to France for refinement into fuel rods, to be used in a research reactor.

In a statement that threatened to confuse the issue further, Ahmadinejad said that the measure was already “an accepted deal.”

The speech was immediately criticized as a “publicity stunt” by Canada’s Foreign Minister Lawrence Cannon.

Privately, Western officials are concerned that the issue of Iran’s nuclear program could hijack the conference, taking the attention away from other business.

A key goal of the conference is to get the signatures of three nuclear weapons states—India, Pakistan, and Israel—to sign the nonproliferation treaty.

Ban said that he also hoped North Korea would return to negotiations.

Yukiya Amano, the director general of the IAEA singled out the country, along with Iran and Syria over failure to cooperate with inspectors.

North Korea severed cooperation in 2009, and Syria in 2008, however Iran has signed a number of safeguards with the agency.

Amano said that his team “remains unable to confirm that all nuclear material is in peaceful activities because Iran has not provided the necessary cooperation,” adding that the country should clarify its position.