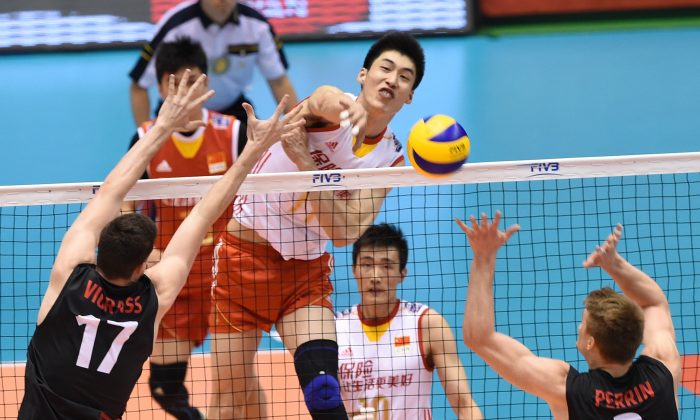 Geng Xin (#11) of China spikes the ball over Graham Vigrass (#17) and John Perrin (#2) of Canada during the men's volleyball world final qualification for the Rio de Janeiro Olympics 2016 in Tokyo on June 5, 2016. (Toru Yamanaka/AFP/Getty Images)
China

Ever since the People’s Republic began participating in the Olympics in the 1980s, China’s grueling athlete training system became famous for churning out medals, but the Spartan sports regimen may end up undoing the country’s performance at this year’s Games in Rio de Janeiro in Brazil.

Because career options are so limited for those who fail to make it to the top, ever-fewer Chinese parents are willing to dedicate their children to a life of sports. According to a report by Reuters, this has caused China’s athletic pool to dry up. In April, the China Sports Daily reported that only about 23,000 people were training to be table-tennis players, compared with nearly four times that number in the late 1980s.

And according to state statistics, of nearly 3,700 sports schools open throughout China in 1990, only 2,183 are still running.

“In the 1980s and 1990s, schools like ours were extremely attractive,” Huang Qin, a Communist Party official working with a sports school in Shanghai, told Reuters.

In those times, when Chinese families were poorer overall, putting a child into the sports world was seen as a chance at winning fame and prosperity.

But standards were extremely vigorous, and failure — the outcome for the majority of young athletes — was not an option. Bereft of conventional schooling, a university degree and a normal job would be nearly impossible to obtain.

As Chinese parents lose their appetite for the all-or-nothing approach, schools are changing their methods, Reuters reports.

Three years ago, Huang’s school, the No.1 Children’s Sports School Pudong New Area, changed a four-decade-old rule that its students had to study, train, and live exclusively on campus.

More than half of the school’s students now study at other institutions. A school in Beijing, which has produced its share of Olympic champions, now focuses on being able to equip athletes with life skills and support needed after their sports careers.

Wang Linwen of Shanxi Province, formerly a professional martial artist, said that the system was in urgent need of reform.

Aged 25, Wang retired in 2009. She had a seven-day work schedule, with academic studies reserved for weekends, she told Reuters.

“I lost a lot because I didn’t experience the education system,” she said.