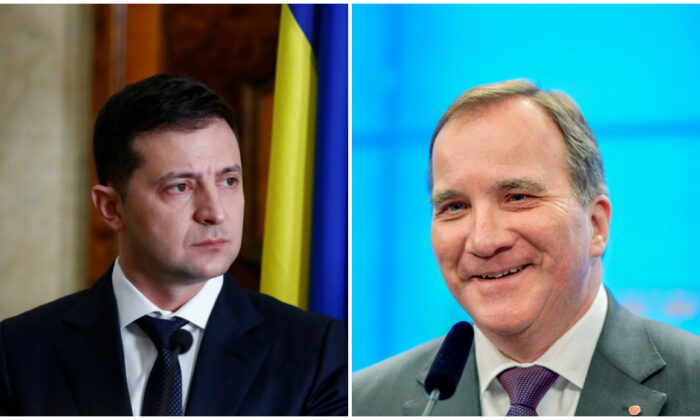 Ahead of Normandy Summit, EU and Sweden Support Ukraine’s Efforts to Restore Peace in Donbas and Crimea

On Dec. 3, President of Ukraine Volodymyr Zelensky had a phone conversation with the new President of the European Commission, Ursula von der Leyen, who took office the day before.

According to the President of Ukraine website, “Ursula von der Leyen assured that the EU would continue its unconditional support for Ukraine’s sovereignty and territorial integrity.”

“The EU sanctions will remain linked to the full implementation of the Minsk agreements and should be extended during the next European Council meeting,” she said.

On Dec. 4, Zelensky met with the Prime Minister of Sweden Stefan Löfven, who was on a working visit to Ukraine. During the visit, Löfven expressed his support to Ukraine’s efforts to restore peace in Eastern Ukraine.

“We condemn Russian aggression in eastern Ukraine and Russia’s illegal annexation of Crimea,” Löfven said. “Ukraine has shown willingness to compromise, and now it is time for Russia to take responsibility.”

When answering journalist’s questions, Löfven also confirmed that Sweden’s position on sanctions imposed on Russia due to conflict in Eastern Ukraine and Crimea annexation would remain unchanged.

“As long as the reasons for these sanctions exist, the sanctions will be continued,” said Löfven.

Ahead of the Normandy Format meeting that will be held in Paris on Dec. 9, Zelensky stated that he would like to give priority to the issue “of the return of all captives to Ukraine.”

Another issue that he would like to raise during the Normandy talks is the withdrawal of all “illegal armed formations” from Donbas.

“If all parties want to end the war as we want, we will be able to achieve tangible results in the complete withdrawal of all troops and illegal weapons,” Zelensky said.

The third issue Ukraine would like to discuss in Paris is “the format and timing of the transfer of the Ukrainian-Russian border under the control of the Ukrainian authorities,” according to Zelensky.

Before the summit, some confidence-building measures took place as the two countries exchanged prisoners, and Russia returned to Ukraine the ships that it seized about a year ago, although the ships were returned in dilapidated conditions.

In 2014, Russian forces invaded the Crimea peninsula, and after that held a controversial local referendum in which “Crimeans voted to join the Russian Federation,” according to the Council of Foreign Relations.  The referendum was called illegal by the United Nations General Assembly, however, Russia annexed the Crimea peninsula despite criticism.

Two months later, pro-Russian separatists in the Donetsk and Luhansk regions of eastern Ukraine commonly known as Donbas held a referendum to declare independence from Ukraine. The referendum was “neither in accordance with the Constitution of Ukraine nor with effect under international law,” according to the report (pdf) from the UN High Commissioner for Human Rights.

According to the Council on Foreign Relations “Ukraine and NATO have reported the buildup of Russian troops and military equipment near Donetsk and Russian cross-border shelling,” but Russia denied it.

Normandy Format group, consisting of four countries, was created on June 6, 2014, when “France, Germany, Russia, and Ukraine leaders met on the margins of the 70th anniversary of the D-Day allied landings in Normandy,” with the aim to resolve the conflict in Eastern Ukraine.