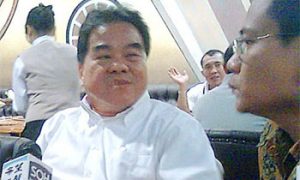 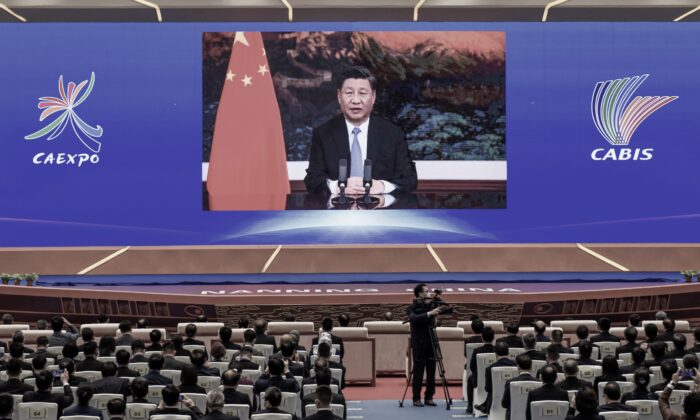 Chinese leader Xi Jinping delivers a speech via video at the opening ceremony of the China-ASEAN Business and Investment Summit, in Nanning, in southern Guangxi, China, on Nov. 27, 2020. (STR/AFP via Getty Images)
Chinese Regime

Since 2003, the Chinese regime has held the China-ASEAN Business and Investment Summit, an annual meeting to encourage trade and investment between China and countries in the Association of Southeast Asian Nations.

In 2019, Beijing themed the meeting around promoting the Belt and Road Initiative, its ambition to increase influence through funding infrastructure projects throughout Southeast and central Asia, eastern Europe, and the African continent.

They also made arrangements to make sure public opinion about the event was positive and prevent participants from expressing negative views.

Despite the preparations, authorities still found that the event lacked professionalism, according to the documents.

One of the files was an “emergency management comprehensive exercise plan” for the opening ceremony of the 2019 summit. The event was held from Sept. 21 to 24 in Nanning city, of China’s southwestern Guangxi region.

Authorities also held a rehearsal on Sept. 17 to prepare.

The document listed 18 different types of emergency situations and how the teams should deal with them.

In the event that the stage collapses, the meeting would be terminated. An emergency team would be responsible for guiding an evacuation of the people on stage, and ask to stop all Chinese media coverage.

If any foreign leaders fainted or felt sick on stage, the webcast would be terminated. The conference logo, promotional film, or other images would be shown on the webcast instead.

If guest speakers made comments that were “not favorable to cooperation,” on-site language interpreters should stop translating right away, and an emergency management team would play alternate music, terminate the live webcast, and take guests away through the nearest exit immediately.

If audience members threw objects onto the podium, a team would arrest people first and take them away from the ceremony, switch the playback screen, and terminate the webcast. Security staff in front of the podium should also block the objects with umbrellas in their hands, the document stated.

If the audience shouted slogans, pulled out banners, or distributed leaflets, a team would take the people away from the scene, play alternate music immediately, switch the screen, and terminate the webcast.

The Epoch Times also obtained a November 6, 2020 document from the business summit’s command center, assessing problems that came up during the 2019 summit.

The document stated that although the team made a lot of emergency preparations, the summit still ended up with multiple problems.

For example, under the category of “foreign protocol work,” the document mentioned that the Indonesian trade minister was at the back of the line during the welcome banquet, indicating the “protocol work” was unprofessional.

In the exhibition area, the document noted that there were unqualified domestic exhibitors, space partitions were not placed properly, and some booths got misclassified which industry sector they belonged to.

For the foreign exhibitors, the command center assessed that their “quality” needed to be improved, and that the exhibition area couldn’t “meet the needs of the ASEAN countries.”

It also noted that foreign business associations did not actively participate in the exhibition, while some foreign representatives were not qualified enough.

In the area of “attracting investment,” the document stated that some exhibits, such as those on construction materials, construction machinery and transport vehicles, and smart energy, had a relatively small number of buyers. There weren’t enough on-site visitors and there was difficulty in recruiting foreign buyers overall, it noted.

The Epoch Times also obtained documents related to the November 2020 business summit, which was again held in Nanning with virtual and in-person events.

In Oct. 20, 2020 meeting notes on “the work of news and propaganda,” local authorities noted that “control of public opinion should be strengthened and media promotion should be done well,” in order to create a “strong and warm atmosphere” for upcoming events.

In Oct. 26, 2020 meeting notes, local authorities said that “we must further prevent foreign forces from carrying out unfavorable propaganda online or offline during the summit, and stabilize the overall social situation in the region.” The term “social stability” is often used by Chinese authorities as a euphemism for stifling dissent.