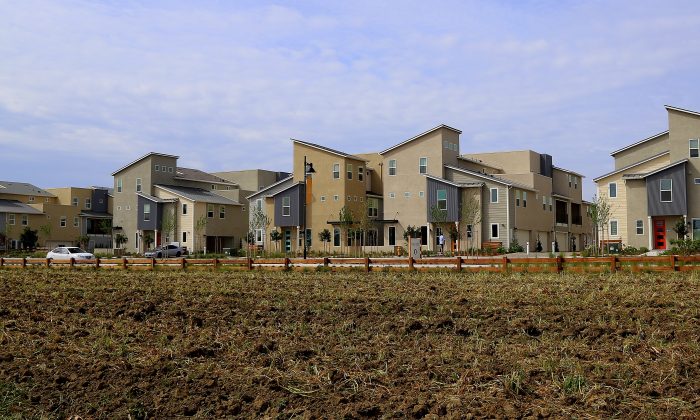 This photo taken April 8, 2016, shows town homes at The Cannery, which is set beside the plowed field of the small, urban farm that is a centerpiece of the community in Davis, Calif. (Michelle Locke via AP)
Home

DAVIS, Calif.—”How ya gonna keep ’em down on the farm?” asks the old song. The answer may be: Build them an agrihood.

Feeding off the continuing interest in eating fresh, local food, developers are ditching golf courses and designing communities around farms, offering residents a taste of the pastoral life—and tasty produce, too.

The latest incarnation of harvest homes is The Cannery, a community designed around a small farm in Davis, about 20 miles west of California’s capital, Sacramento.

Master developer The New Home Co. was looking to build a neighborhood, not just homes, and market research showed that people wanted to connect to community. So “it made lots of sense to take this 7.5-acre piece of property and turn it into an urban farm, have that be the focus point,” says Kevin Carson, New Home president.

Residents can sign up for a weekly box of produce from the farm, and no matter what their level of participation they get to feel part of something, says Carson. “They can see the pumpkins being harvested or the tomatoes being planted or the different seasons that happen on a farm.”

Just the concept of being more connected with how food is grown and produced—that’s important to us.
— Samrina Marshall

Building homes close to food sources isn’t new. Back before refrigerated trucks and sophisticated delivery systems, it was the norm. But modern housing design took a different tack as suburbs sprouted around cities.

Developers looking to distinguish their offerings began designing golf course communities. But it turned out many buyers weren’t into golf so much as the view, says Ed McMahon, senior resident fellow at the Urban Land Institute in Washington, D.C. Since golf courses are big and expensive, developers moved to open spaces, then orchards and pastures, and now gardens and/or urban farms.

It’s still a niche; McMahon is tracking almost 200 projects of various sizes, a fraction of the overall market. Some agrihoods are big, some small. A few involve residents actually working on farms. Most, like The Cannery, have professionals handling the agricultural side of things. But the trend “is growing quite rapidly and there seems to be some interest in it,” says McMahon. “I get a call literally almost once a day from some developer who wants to talk about this.”

Nationwide, examples of agrihoods include Willowsford in Ashburn, Virginia; Agritopia near Phoenix; and Prairie Crossing in Grayslake, Illinois. In California, The Cannery opened in August 2015 and is planned to be a 547-home community, with prices starting in the $400,000s for town homes. The farm has produced tomatoes, sunflowers, and corn, which were harvested by volunteers and donated to a food bank.

Among those moving into The Cannery are Samrina and Mylon Marshall, who were attracted by the farm as well as the energy efficiency of their new home, which is equipped with solar panels. Mylon Marshall’s grandfather was a farmer in California’s Central Valley and he spent a little time in the fields. But he doesn’t have much of a green thumb, so the idea of having fresh, local produce without having to actually work the land appealed.

Living in an area where the farm-to-fork movement is particularly strong, “we really have come to appreciate what it means to eat locally and to eat seasonally,” says Samrina Marshall. “Just the concept of being more connected with how food is grown and produced—that’s important to us.”

Figuring out how the farm will work and who will own it is crucial to success in an agrihood. “Everybody likes the outcome—fresh fruit, flowers, beehives—but you really need somebody who knows what they’re doing to do the growing and the harvesting,” says McMahon.

The plan at The Cannery is for New Home to deed the land to the City of Davis, which will then lease it to the Center for Land-Based Learning, which helps beginning farmers get their start. There are two farming businesses and three farmers at Cannery Farm who already have signed up customers for produce boxes and sold some food to area restaurants, says Mary Kimball, executive director of the center.

Although professionals will do the heavy lifting, there may be opportunities for residents to volunteer on the farm.

Although professionals will do the heavy lifting, there may be opportunities for residents to volunteer on the farm. And even if their participation is limited to talking to farmers and visiting the farm stand, “that’s still going to be a lot more engagement at their local community level than they’ve probably ever had,” says Kimball. “It’s just a very different level of ability to be engaged when it’s in your backyard or it’s down the street and you drive by it every day.”

That’s something McMahon has observed at Prairie Crossing, a pioneering agrihood started 20 years ago.

“It’s a place that I would say has fundamentally changed the relationship of the residents with the land, particularly children,” he says. “It’s about a lot more than growing vegetables; it’s really about growing community.”