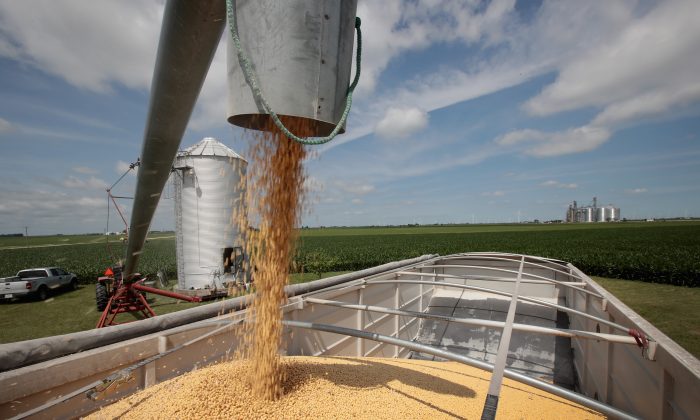 Farmer John Duffy loads soybeans from his grain bin onto a truck before taking them to a grain elevator in Dwight, Illinois, on June 13, 2018. (Scott Olson/Getty Images)
Trump Administration

American Farm Bureau Federation President Zippy Duvall said in a statement that the aid “will provide a welcome measure of temporary relief to our farmers and ranchers who are experiencing the financial effects of the trade war.”

“We are grateful for the administration’s recognition that farmers and ranchers needed positive news now and this will buy us some time,” Duval said.

China, Mexico, the European Union, and Canada imposed retaliatory tariffs on scores of American goods in response to Trump levying duties on steel, aluminum, and $34 billion worth of Chinese products. The aid programs are meant to offset the approximately $11 billion in damage caused by the retaliatory measures.

“U.S. soybean producers want to see President Trump succeed in meeting his trade campaign goals of achieving better trade deals and greater market access,” said American Soybean Association President John Heisdorffer. “And, we appreciate that he has recognized our loss in exports and lower prices and provided some immediate relief.”

While Trump favors free trade, he is using tariffs as leverage to secure better deals for American companies. That approach bore fruit on July 25 when Trump and European Commission President Jean-Claude Juncker announced an agreement to work toward a trade deal with zero tariffs, zero trade barriers, and zero trade subsidies.