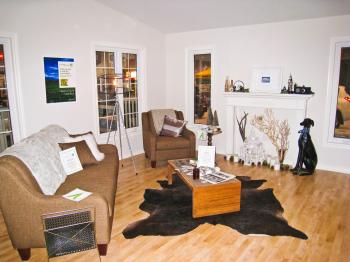 FARMER CHIC: The living room of the soy house contains various items made of soy, including the foam in the couch.
Home

By Joan Delaney
Print
A house made of soy? A building on exhibit at this year’s Royal Agricultural Winter Fair in Toronto comes pretty close. Everything from kitchen cabinets, household insulation, and mattress foam to carpet backing, shingles, and paints and varnishes in the 1,200-square foot home are made of soy.

“The soya board is amazing. We ended up doing the entire kitchen out of the soya board and it looks like it’s a beautiful hardwood,” says veteran designer Janette Ewan, who was hired to style the house.

The house is the result of a partnership between the Grain Farmers of Ontario (GFO), Quality Engineered Homes Ltd., and Habitat for Humanity Halton.

Dale Petrie, GFO’s Director of Strategic Development and Innovation, says that while soy has been used traditionally as a food for both humans and animals, the versatile beans are a renewable alternative to petrochemicals and can be used in the manufacture of a wide array of eco-friendly products.

Soybeans can be separated into two equally useful parts, soy meal and oil. It is the latter that can be used as a replacement to petroleum oil in a myriad of ways.

“When you crush a soya bean you get about 20 percent oil and about 80 percent meal, so that 20 percent is the part that goes into a lot of these materials, particularly the building materials like the foam insulation or the paints, etc,” Petrie says.

He says interest in soy biomaterials is high, one of the main reasons being that they don’t outgas harmful chemicals—something petroleum-based products are known to do. And there is little waste; virtually 100 percent of the soybean is used.

Soybeans are Ontario’s largest crop, and this year`s record yield is worth an estimated $800 million ‘at the farm gate,’ adds Petrie.

Quality Engineered Homes, which has won awards for design, innovation, and customer service, builds its houses indoors at a factory in Kenilworth, Ontario. The homes come with a guaranteed price and completion date. The soy house, which was built in three weeks, costs $175,000.

Quality Homes VP Howard Sher says this is the first time the company incorporated soy components into one of its homes and he thinks “it’s a great idea.”

“We are always looking for ways to decrease our footprint on the environment and the way we build is very waste-free. Because we’re in a factory we can reuse a lot of the materials—we have lots of recycling programs for drywall and lumber—so we’re very cognizant of the amount of wastage that we don’t generate.”

Ewan says she did the decor in “farmer chic,” and as well as the soy, there was an emphasis on using reclaimed or recycled components where possible.

“Everything is very, very ‘green,’ and obviously, using as much soy as we did, it led to a very interesting aesthetic.”

After the Royal Winter Fair, the house will be donated to a needy family by Habitat for Humanity Halton. A team of volunteers from GFO and Quality Homes will work with the family to complete the home. The family has to contribute 500 hours of “sweat equity” before taking possession.

The soy house will be a feature exhibit at the Royal Agricultural Winter Fair until the fair ends on Nov. 16.