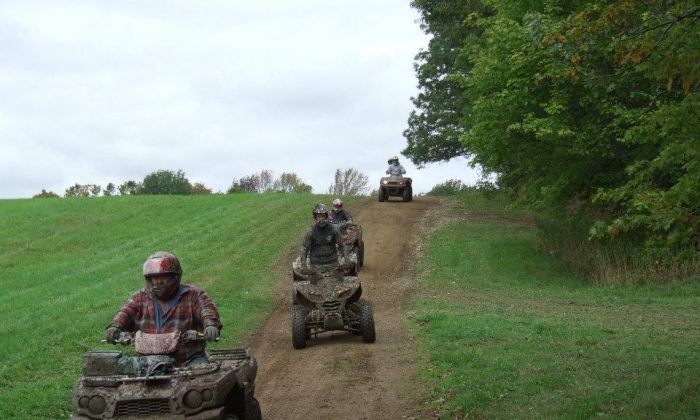 Agri-tourism has been a way for ailing small farms to bring in extra revenue, and for people to get a better idea of how food is actually produced, while having fun. (Courtesy of Tall Pines ATV Park, Andover, N.Y.)
US

“Staying Alive,” was emblematic for “Saturday Night Fever” in 1976. But what does a beat so disco-slick and citified have in common with American farms?

In the three-plus decades since the movie, the deck has been reshuffled in farming. Like hayseeds to the wind, times are long gone when farm families banded together to get the harvest done and at the end of the day to feed the nation.

Etched also to lore is when youngsters could kindle an after-chores baseball game in the barnyard using old milk can covers for bases, or wind twine onto a stick and call it a fishing pole for plucking minnows down by the trestle, or go camping in the pasture on a bed of sod under a canopy of the stars.

What the United States Department of Agriculture calls “structural changes in the farm sector,” cropland, ranches, and dairy farms over time have shifted to the hands of corporations.

“There will never be another farm financial crisis like the 1980s,” reports retired University of Missouri agriculture professor John Ikerd in “Small Farm Today Magazine.” That’s because small farms are disappearing from the landscape.

High interest rates, droughts, and farmland devaluation in the 1980s contributed to record numbers of bankruptcies, and, for many family-owned farms, this was the death-knell. The business of agriculture was usurped “by large, multi-national agribusiness corporations,” adds Ikerd.

With respect to the platitude that necessity is the mother of invention, family-run farms in the face of bust times have found rebirth, like the Phoenix, from the ashes. To them, “Staying alive” signifies adapting to change, in essence, hitting the reset button.

Instead of sending goods to marketplaces, the marketplace has transplanted to the farm itself. The opportunity to buy goods fresh from the farm and at the same time get a taste of the farm experience translates to an increasingly marketable phenomenon.

Thus, a concept known as “agri-tourism” was born.

In New York state, which less than five decades ago boasted agriculture as its number one industry, travelers flock to BMR Acres, an llama farm in Canastota and collect fresh-spun alpaca sweaters and have kinetic experiences with farm animals.

In nearby Utica, Brickhouse Farms serves up a family-run greenhouse and berry-picking junkets. Educational tours are in the spotlight of a consortium of farmers in Dutchess County, where, with the help of Cornell Cooperative Extension and the Farm Bureau, an annual event called “crop art”—sculptures made from hay bales and other farm crops—attracts crowds.

Farm theme parks like the Smiling Hills in Westport Main are popular, according to Entertainment Farming and Agritourism, a publication put out by the National Center for Appropriate Technology. Organized tours for school children to mill through an old wooden barn and mingle with the farm animals provide insights to the age-old question of where things at the supermarket come from. This and similar farms offer hayrides, sleigh rides, hiking, and cross-country skiing packages.

“Recreation farming” is the preferred term of Kathy Kent of Andover, N.Y., co-owner with her husband Tom, of Kent Farms, a family seed oat and potato enterprise begun by Tom’s grandfather in 1939. “The recession of 2009 really hurt,” says Kathy, whose second son Joe came to the rescue with an idea of an ATV park.

Christened “Tall Pines,” the park has 60 miles of trails on 1,325 acres, and it draws enthusiasts from all 50 states. A new wrinkle is Tough Mudder, an annual paramilitary endurance course to support the Wounded Warrior Project.

Both Kathy and Joe are happy about the ripple effect their events have on the local economy, creating higher occupancy at motels and demands for food and other items and services.

The biggest state for agri-toursim is the one once dubbed “The Breadbasket of the World.” California has gone beyond its traditional winery tours in the Napa Valley in opening of a new wrinkle to the agri-tourism industry and has caught the eye of travel guides like Fodor’s.d

One of the most popular agriculture-related events in the state is the Garlic Festival, in Gilroy, which has a cook-off contest and samplings of everything garlic.

The University of California publishes an Agriculture Tourism Directory, a county-by-county guide on farm stays and places to pick one’s own produce, pet farm animals, go for strolls, saddle up for a horse ride, or even take in a hunt. The U.S. Department of Commerce estimates that each California farm in agri-tourism averages $50,000 per year.

And the bottom line is growing, prompting the University of California Extension to host an agri-tourism summit on April 8. “Many California agricultural producers host great opportunities for the enjoyment and education of the public and are ready for visitors, but challenges persist in most regions,” said Cooperative Extension adviser Holly George in a recent news release.

Timothy Wahl has a background in film and teaches English as a second language to adults in Los Angeles.