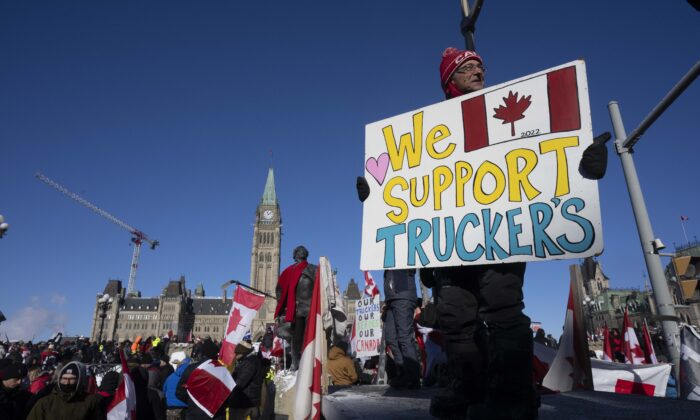 Protesters participating in the truck convoy protest against COVID-19 mandates and restrictions gather on Parliament Hill in Ottawa on Jan. 29, 2022. (The Canadian Press/Adrian Wyld)
Canada

Agreement Was Reached for Convoy Protesters to Reposition Vehicles Before Emergencies Act Was Invoked, Negotiator Says

Dean French, who negotiated with leaders of the Freedom Convoy earlier this year, said the Liberal government didn’t give enough time for a peaceful resolution to transpire before invoking the Emergencies Act to have the protesters removed by force, even though an agreement for the convoy to leave was reached.

“This was a black mark on Canadian history. History will show this was a total overreaction … and the inquiry is going to show that as well,” French told CBC’s Vassy Kapelo in an interview on Aug. 17.

The public hearings part of the inquiry are set to take place next month to look into the unprecedented use of the Emergencies Act, invoked by Prime Minister Justin Trudeau on Feb. 14, to clear the demonstrations in downtown Ottawa that began late January and called for an end to federal COVID-19 vaccine mandates and restrictions.

French, the former chief of staff to Ontario Premier Doug Ford, said negotiations for a peaceful resolution were carried out under a “very tight timeline,” with him speaking to Ottawa Mayor Jim Watson on Feb. 10, and the convoy leaders, including Tamara Lich and convoy lawyer Keith Wilson, on Feb. 11.

The negotiated agrt btw the truckers & City was signed on the Saturday. Logistics mtg held @ city hall Sunday pm w police/city. Trucks started moving Monday a.m., and more moved on Tues. Despite this Trudeau invoked Emergencies Act. I was there and did the negotiations. https://t.co/jggTN4pf0O

But recently released documents show that the government had been discussing the possibility of invoking the act as early as Feb. 10.

The documents include minutes from a cabinet meeting held on Feb. 13 in which Trudeau told his cabinet that he and the Incident Response Group—a committee of ministers and senior officials—were weighing a response to the convoy protest, and had “explored measures to enhance the powers of law enforcement agents on the ground to enhance actions, relieve Canadians and distressed communities and address the disruptions to the economy.”

During the cabinet meeting, Trudeau’s national security and intelligence adviser, Jody Thomas, told cabinet members that “there was potential for a breakthrough” in negotiations with the protesters.

French, who was trying to broker a deal for the trucks to leave the residential area in downtown Ottawa, said he was “surprised” that the wording from the national security adviser to the cabinet “wasn’t a little bit more direct,” since Mayor Watson had reached an agreement with the protesters on Feb. 11.

“We were done the deal that night, essentially.”

“Why wouldn’t Trudeau’s cabinet have waited on the Sunday night [Feb. 13] to say: Mayor Jim Watson, a very credible, respected mayor, has an agreement. Let’s just wait two or three days to see if this peaceful resolution works. If it doesn’t, if it’s not real, then let’s put down the hammer,'” French said.

According to a Feb. 12 letter to Watson obtained by CBC, Lich acknowledged that the protest was “disturbing others,” but said “that was never our intent.”

“The Freedom Convoy Board agree with your request to reduce pressure on the residents and businesses in the City of Ottawa,” Lich wrote.

“We have made a plan to consolidate our protest efforts around Parliament Hill. We will be working hard over the next 24 hours to get buy in from the truckers. We hope to start repositioning our trucks on Monday.”

In a separate letter issued that day, Lich revealed that the Freedom Convoy board had agreed to reposition the trucks, and had begun to work with road captains on the details.

French noted that the protesters were eager to comply with the mayor’s request as they wanted “a peaceful resolution.”

When asked to respond to French’s remarks, Public Safety Minister Marco Mendicino’s office told CBC in a statement that “the government closely monitored the status of negotiations which were disavowed by many associated with the so-called Freedom convoy, and were ultimately unsuccessful.”

Trudeau moved to invoke the Emergencies Act on Feb. 14, less than 24 hours after being informed of the likely breakthrough with the protesters. The act gave the police special powers to compel towing companies to remove the trucks and vehicles parked in the city’s downtown core, and the police cleared the protesters in escalated operations over the next few days.

The act also allowed financial institutions, without having to obtain a court order, to freeze the bank accounts of individuals and entities suspected of making financial contributions to the movement. It was later reported that some banks froze accounts beyond the list of names provided by the RCMP.