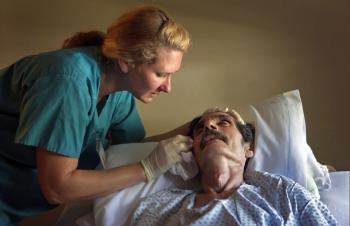 Registered Nurse N. Von Reiter comforts Ramond Garcia as his health quickly declines at the Hospice of Saint John on August 20, 2009 in Lakewood, Colorado. Nursing becoming one of the fastest growing professions in the US. (John Moore/Getty Images)
US

By Jennifer Yang and Ping Sun
Print
The aging baby boomer population is resulting in nursing becoming one of the fastest growing professions in the United States. There is also great demand in Canada.

The U.S. Bureau of Labor statistics predict that about 233,000 additional jobs will open for registered nurses (RNs) each year through 2016; and there will be 66,000 RNs available to fill the openings each year, less than 30 percent of the estimated demand.

There are an existing 2.4 million positions.

With the U.S. unemployment rate hovering around 10 percent, this is a bright opportunity in the job market.

Chairperson of the American Nurses Association Rebecca M. Patton said the Health Care Reform Bill passed in March would add 32 million U.S. citizens into the health care system, with estimated costs of $2.5 trillion. The new health care reform legislation requires that hospitals must keep the ratio of nurses to patients at no higher than 5 to 1 at all times.

“Although the bill has passed, how to execute it effectively is the key,” Patton said. “Nurses will play a key and unique role in the execution of the bill.”

She added that she is optimistic about the future of the nursing industry in the United States.

Anne Sylvie Robitaille, spokeswoman for Ordre des infirmiere et infirmier du Quebec (Order of Nurses and Nursing of Quebec), a key nursing association in Canada, said nurses are in great demand in Quebec and throughout Canada.

Ms. Wu, who first studied nursing in China and has been working as a nurse for nearly 20 years in Quebec since immigrating to Canada, said that the salary for nurses in Canada is high even at the entry level. “It is around $17 to $20 per hour [Canadian currency], and increases by $1 to $2 per hour each year, up to about $40 per hour because of accumulated experience.”

For RNs in Philadelphia, the home of the first hospital in the United States, the average annual salary is $61,719, and average hourly wage is $33.40. Generally, the annual salary range for entry level RNs with an associate degree or above is $40,000 to $50,000.

To keep nurses from leaving, some hospitals give cash bonuses and even prizes such as vacations in the Bahamas.

“In Canada, after graduating from high school, students can study at nursing schools for eighteen months and then become nurses. Students can also study at colleges for three to five years to obtain a Bachelor degree in nursing,” Wu said.

Although there are many well-paid openings for nursing jobs in both Canada and the United States, both health care systems lose nurses because of irregular hours and long shifts. There are also many hospitals in Canada that hire most of their nurses as part-time employees, leaving them concerned about job security.

Bill Deane, who heads enrollment at the School of Nursing at St. Joseph's Hospital in Philadelphia, said there are two ways to become an RN in the United States.

“One is to go to an academic program, such as community college or [a school such as] Drexel University, where you receive an associate’s degree or BSN, and then you take the licensing test in order to become an RN,” he said. “The other one is to go to a hospital-based diploma program, which is what we are, where you can get a diploma rather than an academic degree. Then, you’re allowed to take the test to be an RN.”