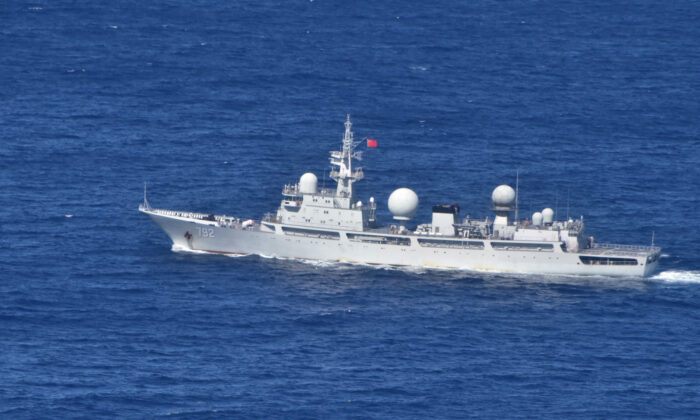 People's Liberation Army-Navy (PLA-N) Intelligence Collection Vessel Haiwangxing operating off the north-west shelf of Australia in an image supplied on May 13, 2022. (Courtesy of the Australian Department of Defence)
Australia

Another Chinese spy ship has been spotted off the coast of Australia, this time near the town of Exmouth on the west, according to Defence Minister Peter Dutton.

The minister revealed the ship was sighted around 6 a.m. on May 13, and that it has not contacted Australian authorities about its approach—a standard international protocol.

“It is a Chinese warship with intelligence gathering capability,” Dutton told reporters in Perth. “It is obviously very strange that it has come this far south and it is hugging the coastline as it goes north, and its intention will be to collect as much electronic intelligence as it can.”

“We haven’t seen a ship come this far south and it is tracking up towards Darwin at the moment,” he added, calling it an “aggressive act” on the part of the Chinese navy.

The Defence Department has identified the vessel as a Dongdiao-class Auxiliary Intelligence ship called Haiwangxing. Australia has often publicised the activities of Chinese naval vessels in the region as a way of exposing and creating pressure on Beijing.

“Defence is actively monitoring the current activities of the Chinese Intelligence Collection Vessel off the north-west coast of Western Australia with a combination of air and maritime capabilities,” according to a statement on May 13.

The actions of the Chinese come just days after it was revealed that Beijing’s Foreign Minister Wang Yi would be visiting the South Pacific region, and notably the Solomon Islands to reportedly formalise a security pact that could open the door to the militarization of the area.

The moves also come on the eve of the Australian federal election, where relations with Beijing have been a focus of both major political parties.

The centre-right Coalition has launched an ongoing attack on the federal opposition Labor Party over its handling of relations with the Chinese Communist Party. Dutton has previously said that he had “no doubt” Beijing would prefer to see Labor win power.

“Penny Wong believes that she can go to Beijing on a charm offensive and she could change the direction of China under President Xi,” he told the National Press Club in Canberra on May 5. “President Xi, of course, would be laughing under his breath as he was entertaining his dear friend in Beijing.”

Meanwhile, the latest incident involving Chinese spy ships comes after a February incident where a People’s Liberation Army—Navy vessel shone a military-grade laser at an Australian surveillance plane, sparking a sharp response from Australian Prime Minister Scott Morrison, who called the action an “act of intimidation.”