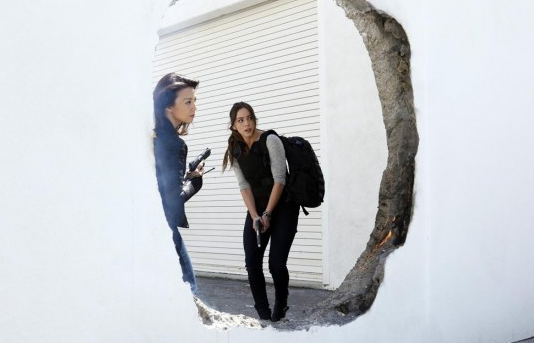 The finale will also feature the anticipated showdown between Coulson’s team and Hydra.

The questions that will be answered come from TVGuide, which obtained a preview.

“Coulson and his team are on their own to take down the now-missing Clairvoyant. But how will they react when they learn Ward is actually a member of Hydra planted in their group? The finale will address Ward’s true allegiances as well as answer questions about Skye’s lineage, who’s controlling Deathlok and what the Clairvoyant wants with Coulson.”

Executive producer Jeffrey Bell said: “We think the audience is waiting for a showdown between Coulson’s team and Garrett’s team and they’re going to get a satisfying payoff to that epic conclusion.”

Executive producer Maurissa Tancharoen added to TVLine: “We’ll put some of the things that we’ve built over the course of this season to bed, as well as tee up mysteries for Season 2.”

The official description for the finale says: “Dark secrets are revealed as Coulson and his team put everything on the line to stop Garrett and the forces of Hydra.”

The Agents of S.H.I.E.L.D. hasn’t yet been renewed for a season 2 but is expected to be renewed due to strong ratings. ABC hasn’t renewed any shows yet.