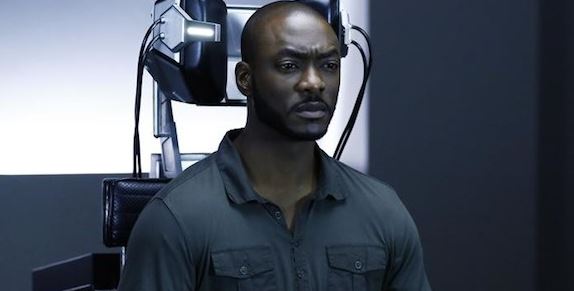 An Agents of S.H.I.E.L.D. actor was spotted on the set of Avengers 2, also known as Age of Ultron.

B.J. Britt, who plays S.H.I.E.L.D. agent Antoine Triplett, was spotted on the set of the Avengers sequel.

That’s according to a film blog, posting as an eyewitness.

“As they were obviously filming indoors we left the throng of people watching the outdoors set to where cap’s bike was, which was the best decision we made as within 30 mins we saw Chris Evans in full Cap get up, Elizabeth Olsen, Aaron Taylor-Johnson and B.J Britt (from Marvel’s Agents of S.H.I.E.L.D, who was checking out the bike below),” the blogger said.

“We also saw a Thor look a like and a Robert Downey Junior double.”

The photo is a little blurry but the blogger sounds sure of herself. It isn’t confirmed, though.

Fans have been wondering about the crossover between Avengers 2 and Agents of S.H.I.E.L.D., and this is the first insight into it.

In the TV show, Triplett was working under Agent Garrett, who turned out to be a Hyrdra supporter. Triplett didn’t know that, so switched over to Coulson’s team following the events of Winter Soldier.

Speaking of Coulson, he’s not expected to be in Avengers 2.

“I think I would have heard about it by now,” Clark Gregg told Movie Pilot. “But I must say as a qualifier, the only way I ever hear about stuff like that is I get a weird phone message with not the right number of numbers on it and somebody says, ‘We need to talk to you.'”

Check out Instagram photos and videos of the set below.