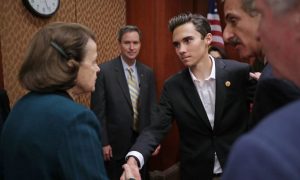 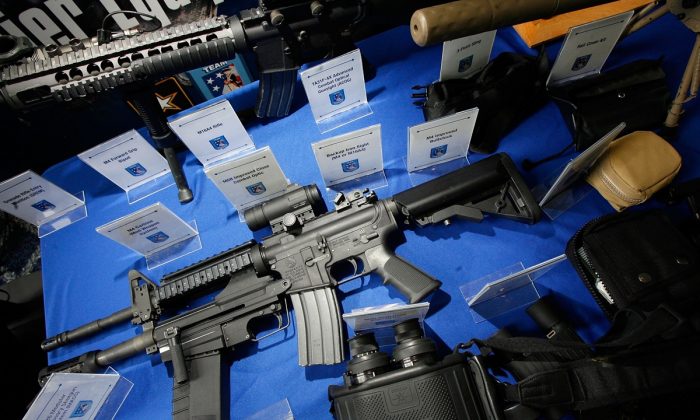 A U.S. Army M4 rifle on display during the US Army Soldier Modernization Day expo in the Rayburn House Office in Washington, on June 6, 2007. (Chip Somodevilla/Getty Images)
US News

The post was regarding a “Black Rifles Matter” sticker she saw on a vehicle parked in the commission’s parking lot in Anchorage, Alaska, and perceived as racist.

Commission members voted 5-2 on April 5 to suspend Marti Buscaglia for 15 working days beginning April 8. She must also send an apology letter to the truck’s owner after the commission chairman approves the wording, according to a report from The Associated Press.

Brenton Linegar, owner of Sage Mechanical a plumbing and heating company, said he was working on March 14 when two business cards were left on his vehicle with a note handwritten on the back of one.

The message, “Please do NOT park this truck with that offensive sticker in this parking lot.” was written on the back of Buscaglia’s card.

Linegar posted on his Facebook page about the occurrence asking if he had missed something.

“Sooooo……got this gem on one of my trucks today. Am I missing something?! I thought this sticker was a pro-second amendment statement? Someone tell me if I’m completely wrong! There was a Department of Human Rights email claiming it was a racist statement.”

***UPDATED***Sooooo……got this gem on one of my trucks today. Am I missing something?! I thought this sticker was a…

A photo of Linegar’s truck with the “Black Guns Matter” sticker was posted to the Alaska State Commission for Human Rights Facebook page with the comment “In what world is this OK?”

The Alaska State Commission for Human Rights was quick to remove the offending post after a backlash of followers expressed their disagreement, and posted an apology.

“Earlier today we posted a sticker that we read as racist that read ‘Black Rifles Matter,'” said the apology post on the Alaska State Commission for Human Rights Facebook page. “It offended many gun owners who felt we were against the second amendment and the right of citizens to own guns. Please know that is not the case. Our concern was with the connotation of the statement to the Black Lives Matter movement. We know some of you were offended by the post so we removed it.”

Earlier today we posted a sticker that we read as racist that read "Black Rifles Matter." It offended many gun owners…

Facebook user Kurt Joseph pointed out they were also infringing on an individual’s first amendment right, the freedom of speech.

“No, you attempted to intimidate someone by telling them they couldn’t park somewhere, because of a bumper sticker, and tried to use a probation officer as intimidation,” said Joseph. “You literally tried to suppress someone’s 1st amendment rights.”

Another Facebook user replied, “As a retired Police Chief and past Chair of the Alaska Police Standards Council, I find the conduct of these two State of Alaska employees to be inexcusable, and only made worse by the laughably-lame and deflective ‘follow-up post’ that was published on this official government page.”

On March 15, Governor Mike Dunleavy posted a response to the incident on his own personal Facebook account.

“After review of a post made on the Alaska State Commission for Human Rights social media page yesterday, my office has requested the Department of Law launch an immediate investigation into the matter,” said Dunleavy. “Protecting an individual’s constitutional rights, including the 1st amendment, is of the utmost importance to this administration.”

After review of a post made on the Alaska State Commission for Human Rights social media page yesterday, my office has…

Use of the commission’s official Facebook page was also suspended by the commission until a plan to “comply with the executive branch’s social media policy” is complete.