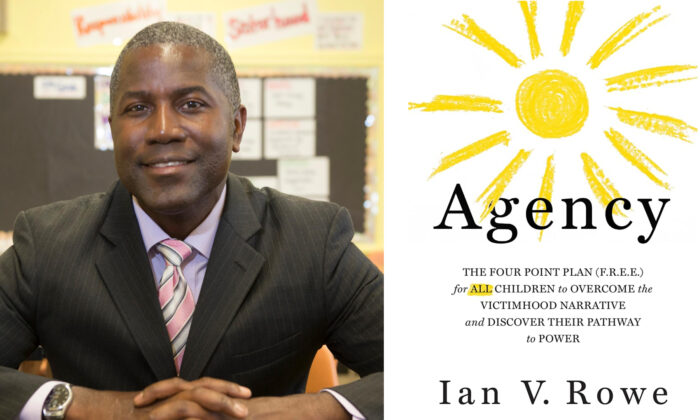 Ian Rowe and the cover of his book “Agency: The Four Point Plan (F.R.E.E.) for All Children to Overcome the Victimhood Narrative and Discover Their Pathway to Power.”
Viewpoints

The Gallup polling organization seems to serve up endlessly bleak news about how Americans feel about God and country.

I wrote recently about their report of the historically low percentage of Americans that say they believe in God.

Now Gallup reports that a historically low number of Americans believe in ourselves and our country.

The percentage of Americans who now say, per Gallup, they are “extremely proud” of their country is at a historically low 38 percent.

And the average percentage, 27 percent, of Americans that have confidence in our major institutions is at an all-time low.

Inflation, slow growth and weekly reports about pointless violence do not inspire good feelings and confidence.

But the good news is we can still speak freely and express ourselves. Often, it takes courage to say publicly what you see and feel is wrong. But you can do it.

We have a wonderful example in a new book from American Enterprise Institute scholar Ian Rowe, “Agency: The Four Point Plan (F.R.E.E.) for All Children to Overcome the Victimhood Narrative and Discover Their Pathway to Power.”

Rowe is well positioned to speak about our country, what works and where the problems are, as the son of Jamaican immigrants who struggled so their sons would “make it” in America.

He has an MBA from Harvard Business School, a Bachelor of Science degree in computer science engineering from Cornell University, and a diploma in electrical engineering from Brooklyn Technical High School. He’s now a senior fellow, focusing on education and upward mobility, family formation, and adoption, at one of Washington’s leading policy institutes.

He is also an education entrepreneur who was just profiled in The Wall Street Journal.

Rowe is the cofounder and CEO of Vertex Partnership Academies, which has been hired to launch and manage a new charter high school in the Bronx that will give education opportunity to mostly black and Hispanic students from low-income families.

Per the WSJ profile, in the local school district where the school is being launched, only 7 percent of students, only 4 percent of black students, entering the ninth grade are ready for college four years later.

However, Rowe and Vertex are being sued by the United Federation of Teachers. The teachers union claims that the school is a new school, rather than an extension of an existing network, and new charters are prohibited in New York City.

Given Rowe’s extensive successful experience running charter schools, and the dismal performance of public schools in this district, this lawsuit is sad commentary that improving education for youngsters is not a priority for the United Federation of Teachers.

Rowe’s core thesis in his new book “Agency” is that our national discourse is woefully polarized and flawed.

One side argues that it is up to individuals, through force of character and will, to take personal responsibility to overcome challenges and obstacles to achieve and get ahead.

The other side, which Rowe calls the “blame-the-system” perspective, argues that institutional obstacles, rooted in racism and class, are insurmountable, even to the most highly motivated and well-intentioned.

Rowe argues that both are missing a key element crucial in human reality, which he calls “agency.” Agency amounts to the intermediating institutions that provide the framework that enables and unleashes in individuals “morally informed free will.”

These elements are developed and explained in the course of this wonderful and important book.

Ian Rowe brings critical new perspective to our national discourse. Those who care about our nation should read “Agency” for important insights on fixing our culture.