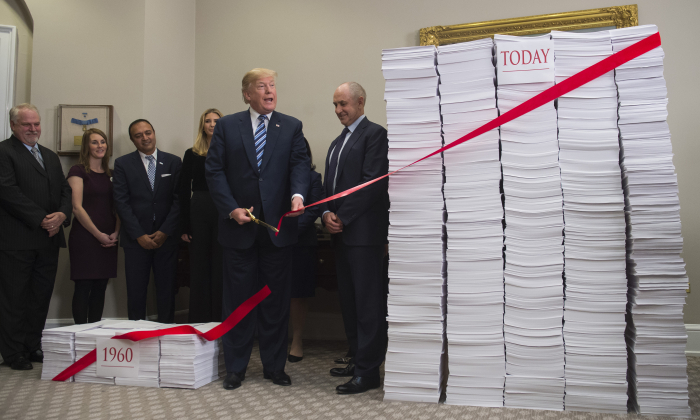 President Donald Trump cuts a red tape tied between two stacks of papers representing the government regulations of the 1960s (L) and the regulations of today (R) after he spoke about his administration's efforts in deregulation in the Roosevelt Room of the White House in Washington on Dec. 14, 2017. (Saul Loeb/AFP/Getty Images)
Trump Administration

The federal government is outpacing President Donald Trump’s goal for saving through deregulation with two months left in the fiscal year, according to a report by the American Action Forum. Twelve out of 22 federal agencies have already met or surpassed the savings target set by the president last year.

The president’s order further required that federal agencies offset the costs of any new regulation through the elimination of two old regulations. The American Action Forum report shows that the government is outpacing that requirement as well.

The Department of Labor leads the way in terms of deregulation savings, racking up $417 million so far this fiscal year. The Department of Health and Human Services is second but has notably surpassed the savings goal by the biggest amount: $285 million.

The Department of the Interior is the furthest from meeting its savings goal. That agency is $157 million short of its goal, although that’s likely to change soon since a deregulation that will save taxpayers $227 annually is under consideration.

Meanwhile, the departments of Energy, Defense, and Homeland Security are far from their respective goals and have yet to develop deregulatory rules to bring budgets in line.

“With less than two months remaining in [this fiscal year], the Trump administration is well on its way to surpassing its regulatory budget goals, yet on an individual basis, a few notable agencies have substantial work to do,” Dan Bosch, the director of regulatory policy at the American Action Forum, wrote in the report.

“It will be worth watching to see if these agencies ramp up their deregulatory activity to maximize their savings ahead of September 30.”