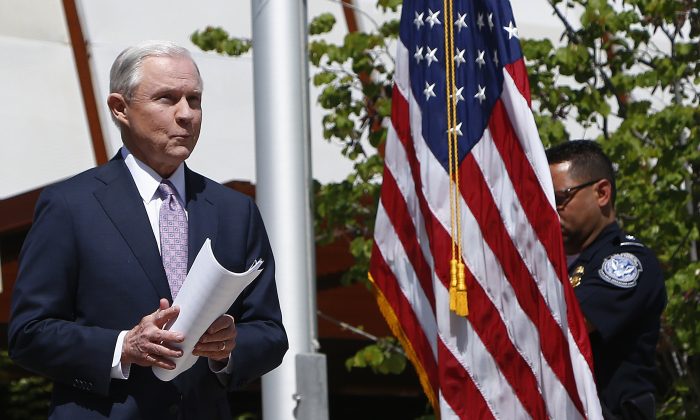 Attorney General Jeff Sessions in Nogales, Ariz., on April 11, 2017. Sessions announced making immigration enforcement a key Justice Department priority, saying he will speed up deportations of immigrants in the country illegally who were convicted of federal crimes. (AP Photo/Ross D. Franklin)
US

U.S. Attorney General Jeff Sessions vowed this week to bring the “full weight” of federal enforcement and prosecution to focus on criminal aliens, smugglers (known as “coyotes”), and document forgers. He announced an end to the “catch and release” policy of the last administration and a speedier process for hiring immigration judges.

Sessions issued new priorities to all federal prosecutors during a border trip to Nogales, Arizona, on April 11.

Nationwide, attorneys general will be expected to charge anyone connected to the transportation and harboring of aliens. “As you know too well, this is a booming business,” Sessions said. “No more. We’re going to shut down and jail all those who have been profiting from this lawlessness.”

Criminal aliens who illegally re-enter the country after removal will be referred for felony prosecution, rather than a misdemeanor. Priority will be given to offenders with gang or cartel affiliations, links to drug smuggling, or a criminal history, or who are considered a risk to public safety.

All U.S. attorneys’ offices must immediately designate an assistant U.S. attorney as the “border coordinator” in that district to ensure the new guidelines are implemented.

“For those that continue to seek improper and illegal entry into this country, be forewarned: This is a new era. This is the Trump era,” Sessions said.

The catch and release practice allowed unlawful and hopeful immigrants to remain in the country while they waited for a court decision—which could take years.

“We will now be detaining all adults who are apprehended at the border. They will not be released,” Sessions said.

To speed up the processing of detainees, 25 immigration judges have been relocated to detention centers along the border.

Sessions announced a streamlined hiring system to get more immigration judges in the system to try to ease a massive 542,411-case backlog.

He plans to add 50 more immigration judges to the bench this year and 75 next year.