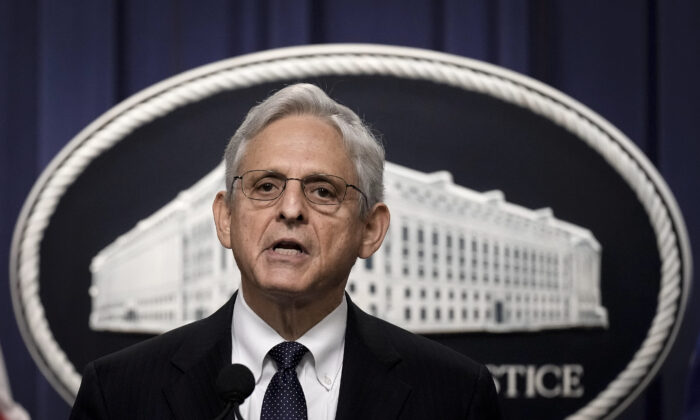 The FBI usually seeks approval from the top before conducting a raid on a political target. Garland’s confirmation was the first public statement from the Department of Justice (DOJ) and the FBI on the unprecedented search.

Garland told reporters that his agency filed a motion on Aug. 11 to unseal the court-approved search warrant that was executed at a home “belonging to the former president,” after Trump confirmed the raid, “as is his right.”

“I personally approved the decision to seek a search warrant in this matter. … The Department does not take such a decision lightly,” Garland said.

He said copies of the warrant were provided to Trump’s lawyers on Aug. 8 by FBI agents.

The attorney general claimed that FBI agents are “patriotic” and “dedicated” public servants who protect Americans against violent crime and terrorism. “I am honored to work alongside them,” he said.

So far, the Justice Department and FBI have remained mostly quiet about the purpose and probable cause behind the raid and have repeatedly declined to publicly comment to The Epoch Times and other news outlets. Only alleged anonymous sources within the FBI and Justice Department have sporadically provided details about the incident to legacy media since Aug. 8.

A day before Garland’s statement, FBI Director Christopher Wray declined to speak about the FBI search, saying that it is “not something I can talk about, and I’d refer you to the department.”

The White House, meanwhile, said it wasn’t aware of the FBI raid. On Aug. 9, when asked by reporters about what Garland told him, President Joe Biden didn’t answer.

The judge who reportedly signed off on the warrant in the case, Bruce Reinhart, ordered the Justice Department on Aug. 10 to file a response before Aug. 15 after Judicial Watch and others asked the court to unseal the warrant.

Republicans in Congress have repeatedly called on the Justice Department to release documents and other information about the raid, with some arguing that it appears to be politically motivated. Even some Democrats, including former New York Gov. Andrew Cuomo, asserted that the agencies need to provide answers about the raid.

Because of the extraordinary targeting of a former U.S. president, many have speculated that officials at the highest levels of the Biden administration, including Garland and Wray, would have signed off on it. Meanwhile, news of the incident has triggered a political firestorm with just 90 days to go before the 2022 midterms and a possible announcement that Trump might run for president in 2024.

It was Trump on Aug. 8 who confirmed the FBI raid at his Palm Beach home. The former president reportedly wasn’t there when it happened, and his lawyers said they weren’t able to observe the agents.

“Such an assault could only take place in broken, Third-World Countries. Sadly, America has now become one of those Countries, corrupt at a level not seen before. They even broke into my safe!” Trump wrote on his Truth Social website.

Members of Trump’s family and his lawyers said in multiple media interviews that agents went into several rooms in Mar-a-Lago, including Trump’s bedroom and office. The agents, his son Eric Trump said, didn’t provide lawyers with a copy of the warrant before the search and wouldn’t answer questions.

When speaking on Fox News about the search, Eric Trump said it was done because the “National Archives wanted to … corroborate whether or not Donald Trump had any documents in his possession.” Trump was referring to the National Archives having confirmed in February that classified documents were allegedly among several boxes that Trump took to his Florida residence last year.

As for Garland, some Republican lawmakers warned that he could be investigated or even impeached over the Aug. 8 raid if the GOP takes the House in 2022. The party of the president tends to lose seats in midterm elections, and Democrats currently hold slim majorities in both chambers of Congress.

“I’ve seen enough. The Department of Justice has reached an intolerable state of weaponized politicization,” House Minority Leader Kevin McCarthy (R-Calif.) said in a statement. “When Republicans take back the House, we will conduct immediate oversight of this department, follow the facts, and leave no stone unturned.”

In the Senate, Sen. Rand Paul (R-Ky.) suggested that if it’s found that Garland engaged in anything improper, he could face impeachment.

“Now, this is really something that’s going to require an investigation,” Paul said. “And I wouldn’t be surprised if the investigation leads to abuse of power that this could even lead to an impeachment of the attorney general.”