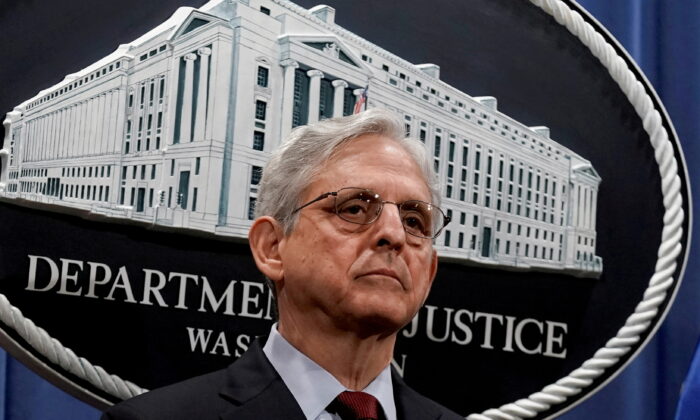 AG Merrick Garland Has Conflict of Interest in Order of Probes Into Parents: Activists

Attorney General Merrick Garland has a conflict of interest in his order to federal officials to target parents who are suspected of intimidating, harassing, or being violent toward school staffers, activists say.

Garland in an Oct. 4 memorandum directed FBI agents and U.S. attorneys to address what he described as “a disturbing spike” in such behavior in recent months. He said a series of measures will be announced soon “to address the rise in criminal conduct directed toward school personnel.”

Parents have increasingly protested against the rise of critical race theory teachings in schools, but few incidents have turned violent.

Some activists say Garland’s order constitutes a conflict of interest, pointing to contracts that his son-in-law’s company, Panorama Education, has signed with school districts across the country.

In one case, Asra Nomani of Parents Defending Education said, the company signed a $1.8 million contract with Fairfax County Public Schools in Virginia that will see Panorama collect information on students with surveys including questions about whether they feel “gender fluid.” There are also portions allocated for “equity” professional development, a word often used by critical race theorists.

“Panorama Education staff gets status as ‘school officials’ so they have the right to private student data under federal law, according to an email just sent by a Fairfax County school district official. This is federal law that Garland would have to enforce and Big Tech is now circumventing,” Nomani wrote in a blog post.

“The Attorney General is instructing the FBI to investigate parents who might pose a financial threat to the business of his daughter’s husband,” she wrote in another blog, under the moniker Sundance.

“The allegations that Attorney General Garland’s family is potentially profiting off his recent decision to use federal law enforcement to shut down debate at school board meetings is deeply troubling. If this turns out to be true, Congress must hold oversight hearings now to investigate potential corruption,” he told The Epoch Times via email.

Panorama and the Department of Justice (DOJ) didn’t immediately respond to requests for comment by The Epoch Times.

A Panorama spokesperson told news outlets that the company “only uses student data for the purpose of helping schools and districts better serve their students.”

The company isn’t linked with “any particular academic philosophy, including critical race theory,” the spokesperson said. “The only relationship between Panorama Education and Attorney General Merrick Garland is that Panorama’s co-founder Xan Tanner is AG Garland’s son-in-law.”

Lisa Monaco, a top DOJ official, defended the order before Congress this week, arguing that “spirited debate” was welcome at school board meetings but that “violence is not appropriate.”

Most of the incidents were merely parents growing “rowdy or disruptive,” writer Zaid Jilani said.

The National School Boards Association urged the Biden administration to deal with “angry mobs” of parents just days before the order was issued, listing a number of incidents it deemed over the line. “The classification of these heinous actions could be the equivalent to a form of domestic terrorism and hate crimes,” the association wrote.

The association welcomed the new order, saying it sent “a strong message to individuals with violent intent who are focused on causing chaos, disrupting our public schools, and driving wedges between school boards and the parents, students, and communities they serve.”