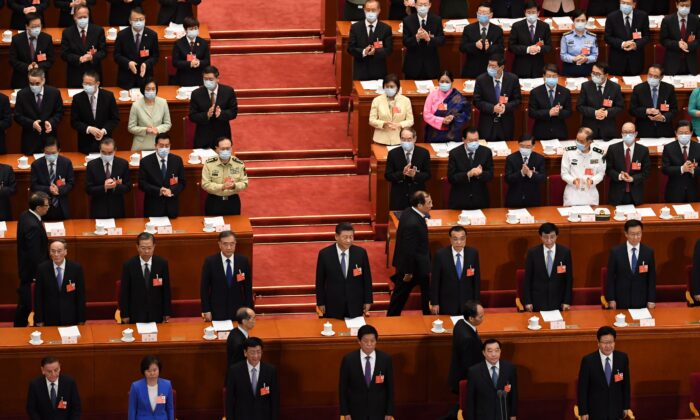 CCP leader Xi Jinping (C) arrives during the second plenary session of the National People’s Congress in the Great Hall of the People in Beijing on May 25, 2020. (Noel Celis /AFP via Getty Images)
US News

A coalition of human rights activists and organizations has sent an open letter to U.S. Attorney General William Barr urging him to designate the Chinese Communist Party (CCP) as a “transnational criminal organization” (TCO).

The open letter is a bold move to call the CCP to account for its role in what U.S. officials say are crimes that range from theft of intellectual property, to human trafficking, to the deliberate spread of the lethal CCP virus throughout the world.

In laying out the case, the authors cite the Trump administration’s Executive Order 13773 as the legal framework supporting the designation of the CCP as an organization that has been committing often audacious crimes not only in the United States, but across the world, for decades.

The letter was drafted largely by well-known human and religious rights and children’s welfare lawyer Liz Yore, based on the vision and input from Hong Kong businessman-turned-activist Elmer Yuen, the nonprofit Save the Persecuted Christians, and the Committee on the Present Danger: China.

Yuen has been active in recent months in seeking a legal basis by which to disarm the CCP, in order to ultimately cause its fall from power and complete dissolution, as reported previously.

The executive order, signed by Trump on Feb. 9, 2017, states that it’s the “policy of the executive branch … to strengthen enforcement of Federal law in order to thwart transnational criminal organizations and subsidiary organizations, including criminal gangs, cartels, racketeering organizations, and other groups engaged in illicit activities that present a threat to public safety and national security.”

Among the offenses that such groups may be related to include human, drug, wildlife, and weapons trafficking.

The executive order cites “corruption, cybercrime, fraud, financial crimes, and intellectual-property theft” as activities in which TCO’s may be engaged, which also include hiding or transferring the illicit profits from crimes committed by the organization.

A Litany of Crimes

The letter to Barr lays out a litany of the most egregious of the crimes the authors say warrant the TCO designation for the CCP, beginning with fentanyl and the deliberate coverup of the human transmissibility of the CCP virus.

Identifying the CCP as a TCO is “clearly justified,” the letter states, “by the epidemic of American citizens victimized and killed by the Chinese manufactured and transmitted lethal synthetic drug, Fentanyl.”

The letter cites Centers for Disease Control and Prevention figures showing that more than 31,000 Americans overdosed on fentanyl and other synthetic narcotics in 2018.

China’s handling of the CCP virus, which causes the disease COVID-19, is bluntly cited as a crime by the authors, as well. The virus, which is having “debilitating health and economic effects” in the United States and around the world, could have been contained, the letter suggests, had CCP authorities not “knowingly and maliciously failed to warn the world … and covered up its transmission and lethality,” causing, at time of writing, more than 140,000 deaths in the United States alone.

Yore said that she has been “seeing the administration lay out one speech after another” over the past few weeks accusing China of illegal behavior and crimes against humanity, giving her the evidence to cite case after case of criminal activity by the CCP in the letter to Barr.

In a June 24 speech, national security adviser Robert C. O’Brien listed the hacking of the personal data of 145 million Americans from Equifax in 2017, and the 2019 hack of Marriott that garnered the CCP personal details on 383 million guests as examples of China’s malfeasance in the cyber environment.

And then, in a press conference on July 8, Secretary of State Mike Pompeo, in laying the blame for the spread of the CCP virus directly at the feet of the CCP, said the CCP has “an enormous credibility problem.”

Pompeo said of the camps holding Muslim Uyghurs in China’s northwest Xinjiang Province that “new reports of forced abortions and sterilizations add to a body of evidence” indicate that they aren’t the educational and training camps that the CCP characterizes them as.

The letter also highlights the March findings of the China Tribunal, which found the CCP guilty of forced organ harvesting on an industrial scale, labeling it “one of the worst atrocities” in the world.

The Power of a Name

“You know, if he [Trump] designates the CCP as a criminal organization, it’s a sensational act, globally,” Yuen said.

“Everybody keeps talking about all of the crimes” committed by the CCP, Yuen said, “but nobody put it all together and called it organized crime.”

“All I’m doing is giving it a collective name.”

Sean Lin of the Committee on the Present Danger said if more countries “can adopt similar measures, that would be more powerful.”

“I think that it’s a long-time frustration for anyone who works on the human rights issue.

“China has committed so many crimes. In the Congress, we have hearings, and reviews, testimony, but no fundamental attacks on the CCP,” Lin said.

“So, this designation is a powerful tool.”

Yore said the designation of the CCP as a criminal organization “triggers what is embodied in the presidential order.”

That order specifies targeting the TCO with “a country-wide coordination among law enforcement, among federal agencies, among professionals [and] law enforcement partners,” Yore said.

The TCO designation also triggers “economic sanctions against banks,” as well as “companies that do business with the CCP.”

“There are … layers upon layers of sanctions and criminal penalties that can be put in place not just against the CCP once it’s designated a TCO,” but also against other organizations who are complicit in the crimes being perpetrated by the criminal organization, in this case, the CCP, Yore said.

As with other already-designated TCO’s, such as MS-13, “banks that would do business with [them] could be charged, fined, penalized, and sanctioned.”

“There are very strict banking laws with respect to notification [and] transparency with the federal law enforcement agencies,” she said.

“You have to designate a disease before you can begin to treat it or to fight it.

“The Trump administration has made great strides in the first 3 1/2 years to begin to educate the public on what the CCP is doing.

“I’m a great believer in if you describe and label behavior as criminal, you begin to have a sea change in the public’s view of it,” Yore said.

Yuen said that “in China, every company with over three Party members, you have to form a branch, which will have its own secretary, so every company in China is basically controlled by the Communist Party, and it goes back to Xi Jinping.”

In China, the CCP is “way above the CEO of a company.”