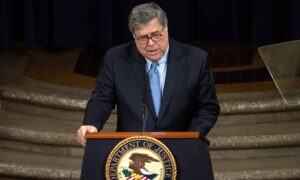 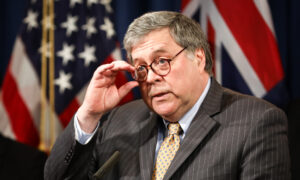 Attorney General William Barr speaks during in a roundtable with law enforcement officials in the State Dining Room of the White House in Washington on June, 8, 2020. (Doug Mills-Pool/Getty Images)
US News

AG Barr on Police Reform: ‘It’s a Question of Striking the Right Balance’

Attorney General William Barr on Wednesday called on lawmakers and officials to approach police reform with prudence and balance in order to avoid extremes and ensure peace and security in society.

He said that while maintaining a police force and institutions designed to protect the community is crucial, he noted that implementing “checks” on those institutions is important to prevent them from becoming oppressive.

“It’s a question of striking the right balance,” Barr said. “We need to support the police so they’re out there protecting the community. But at the same time, we have to be sure that there aren’t these abuses.”

“It’s not defunding the police or doing away with the police or demonizing the police. Nor is it giving short shrift to the legitimate concerns that are out there about police abuses and overreach. So I think we have to strike a balance here,” he added.

The top law enforcement official made his comments during a press conference with Sen. Tim Scott (R-S.C.) after they met with community leaders and members of law enforcement in South Carolina. During the meeting, the community, religious, and business leaders expressed their concerns over a range of issues regarding the relationship between law enforcement and the African American community, including the distrust toward law enforcement, the use of force against unarmed black individuals, and the problem of profiling of individuals.

The attorney general has been visiting communities and law enforcement officials across the nation in recent weeks to seek input on a range of issues including community relations, and police training and practices. The ongoing push for police reform culminated in recent months following the death of George Floyd, a black man who died in the custody of the Minneapolis Police Department, which sparked months of nationwide protests and riots.

Along with concerns, the officials also examined specific proposals for reform, including Scott’s police reform bill, the Just and Unifying Solutions to Invigorate Communities Everywhere Act, also known as the JUSTICE Act.

The proposed law (pdf) introduced in June would ban the use of chokeholds, increase the use of body cameras, provide for more police training, and provide for more transparency in policing practices, for example, by mandating reporting to the FBI each time a firearm is discharged by a police officer toward a civilian.

The bill failed a procedural vote in the Senate to begin debate after Democrats denied Republicans the 60 votes needed to begin the process. Democrats and multiple civil rights groups such as the NAACP and the American Civil Liberties Union have criticized the bill as an inadequate response to address police abuse and racial injustice.

During Wednesday’s press conference, Scott said he has since participated in many conversations with House leaders, including Rep. Karen Bass (D-Calif.), who chairs the Congressional Black Caucus, to discuss details of the bill.

“I’m hopeful that the next couple of weeks may produce the type of outcomes that we’re looking for,” Scott said. “I’m an eternal optimist, so I’m always looking for the silver lining. But the conversations that are now, folks who are now calling me about the legislation from the other side, suggests that perhaps it’s not dead.”