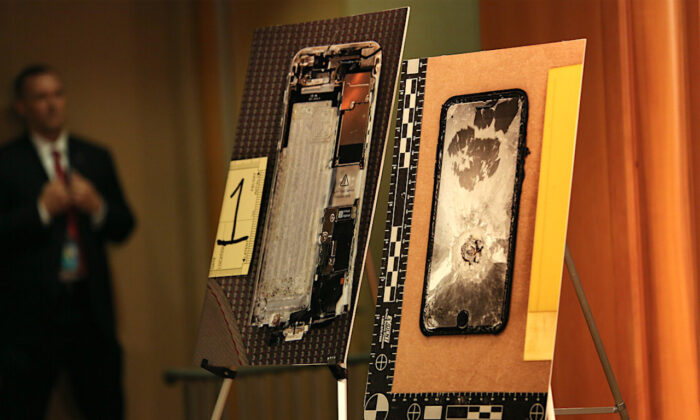 Images of two Apple iPhones that the Pensacola naval base shooter, Royal Saudi Air Force 2nd Lt. Mohammed Alshamrani, tried to destroy are on display at a press conference at the Justice Department in Washington on Jan, 13, 2020. (Charlotte Cuthbertson/The Epoch Times)
US News

Attorney General William Barr has called on Apple to help unlock two iPhones used by a Saudi military trainee who opened-fire at a U.S. naval base last month, killing three and injuring eight others.

Barr made the request during a press conference on Monday while announcing the findings of the criminal investigation into the Dec. 6 shooting at Pensacola Naval Air Station in Florida.

“We have asked Apple for their help in unlocking the shooter’s iPhones. So far Apple has not given us any substantive assistance,” Barr said. “This situation perfectly illustrates why it is critical that investigators be able to get access to digital evidence once they have obtained a court order based on probable cause.”

“We call on Apple and other technology companies to help us find a solution so that we can better protect the lives of Americans and prevent future attacks,” he added.

The shooter, Royal Saudi Air Force 2nd Lt. Mohammed Alshamrani, 21, open-fired at the naval base in an attack that lasted for about 15 minutes before he was fatally shot by police during a gunfight. Alshamrani was a flight student at Pensacola, where members of foreign militaries are routinely trained by the United States.

During the exchange of fire, Alshamrani disengaged long enough to place one of the phones on the floor and shoot a single round into the device, Barr said. He added that the other phone was also damaged.

Barr said experts at the FBI crime lab were able to fix both of the damaged phones so they are operational but have not been able to unlock the password-protected and encrypted phones.

The attorney general says it is important to obtain access to the phones in order to find out with whom the shooter was communicating and the content of his conversations prior to the attack.

Federal officials are calling the Dec. 6 shooting an “act of terrorism.” They say investigators found evidence that Alshamrani was motivated by jihadist ideology, including a social media message posted on Sept. 11 last year, stating, “The countdown has begun,” and other anti-American, anti-Israel, and jihadi messages on social media, as recent as two hours before his attack. Alshamrani also visited the 911 Memorial in New York City during the Thanksgiving weekend.

Investigators say they are still continuing their probe and are looking for evidence of co-conspirators in the attack.

Justice Department officials said Apple has provided timely and substantial assistance to other parts of the criminal investigation such as responding to warrants issued to iCloud accounts. However, they added that Apple has not indicated they are willing to assist the FBI in gaining access to the phones after the bureau asked the company for help.

Last week, FBI general counsel Dana Boente sent a letter to Apple asking the company to assist with unlocking the phones. Boente told the company that the investigation was a “high-priority national security matter,” reported the Associated Press.

Apple did not immediately respond to our request to comment, but in a statement to the news wire last week, Apple said, “We have the greatest respect for law enforcement and have always worked cooperatively to help in their investigations. When the FBI requested information from us relating to this case a month ago we gave them all of the data in our possession and we will continue to support them with the data we have available.”

This case is the latest standoff between the government and big tech on the extent companies have to comply with government requests to assist with unlocking encrypted devices or social media accounts in investigations. In 2015, the Justice Department sued Apple after it resisted government efforts to gain access to an iPhone belonging to the shooter in San Bernardino, California, who killed 14 people in a terrorist attack. The FBI put a hold on the court order after it found another way to get into the phone.