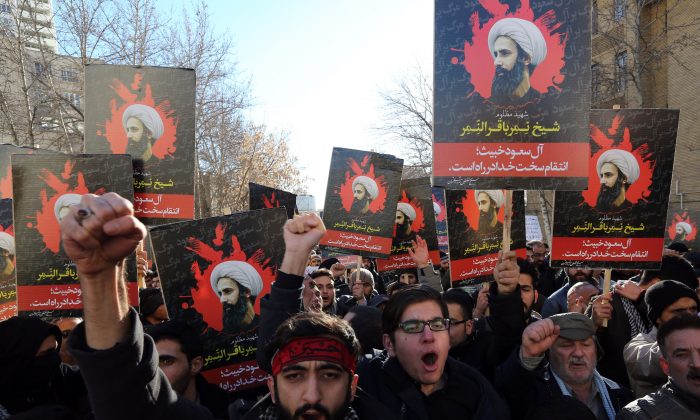 Iranian men hold portraits of Shia cleric Sheik Nimr al-Nimr during a demonstration against his execution by Saudi authorities, on Jan. 3, 2016, outside the Saudi embassy in Tehran. Iran and Iraq's top Shiite leaders condemned Saudi Arabia's execution of Nimr, warning ahead of protests that the killing was an injustice that could have serious consequences. (Atta Kenare/AFP/Getty Images)
Middle East

Ever since Saudi Arabia executed Shia Cleric Nimr al-Nimr for terrorist offenses, tensions between Iran and Saudi Arabia have been escalating by the day. After the execution, the Saudi Embassy was stormed by protesters in Tehran. Riyadh has now severed diplomatic relations with Tehran—and the UAE, Bahrain, and Sudan, staunch Saudi allies, have followed suit, spurred on by Iran’s portentous prediction of “divine vengeance” for the execution.

Iran’s President Hassan Rouhani condemned those who stormed the embassy, but was also critical of the Saudis’ behavior, suggesting that “the Saudi government has damaged its image, more than before, among the countries in the world, in particular [among] Islamic countries, by this un-Islamic act.”

The concerns that led to Sheikh Nimr’s execution—that he was an agent of ‘foreign meddling’ in the kingdom—are not new.

The concerns that led to Sheikh Nimr’s execution—that he was an agent of “foreign meddling” in the kingdom—are not new. A Shia cleric who spent time in Iran and Syria, Nimr was an outspoken critic of the house of Saud and played a prominent role in the 2011 uprisings in the Shia-dominated Eastern Province.

But the tension goes deeper than that. Relations between Riyadh and Tehran have been tense ever since the Islamic Republic of Iran was established in the revolution of 1979, adding religious competition to a burgeoning geopolitical rivalry.

Since Iran’s revolution of 1979, the Gulf’s Sunni governments have long been concerned that Iran would seek to manipulate Shia populations across the Middle East.

Since the revolution, the Gulf’s Sunni governments have long been concerned that Iran would seek to manipulate Shia populations across the Middle East, whom are often viewed as “fifth columns.” This suspicion was perhaps best articulated by King Abdullah of Jordan, who in 2004 referred to a “Shia Crescent,” an Iranian sphere of influence stretching from Iran to Lebanon.

This was furthered by Iranian complicity in a number of subversive acts, including an attempted coup d’etat in Bahrain in 1981, an attempted assassination of the Emir of Kuwait in 1985, and the establishment of a Hezbollah franchise in Hejaz, in western Saudi Arabia, two years later.

As a consequence of this fear, in recent years, Saudi Arabia and Iran have become embroiled in a number of proxy conflicts, as collapses in political order elsewhere opened up new chances to compete for influence.

After Saddam Hussein was overthrown in Iraq, a Shia government was established. Under Prime Minister Nouri al-Maliki, Sunni Iraqis were marginalized and persecuted—a sectarian crackdown now credited with fueling the rise of Islamic State (ISIS), many of whose commanders and fighters are Sunnis purged from the U.S.-trained Iraqi army. This has not only left a legacy of mutual hatred and suspicion, but has also allowed Iran to gain a serious foothold in Iraq—much to the Saudis’ chagrin.

Saudi Allies Scale Down Ties to Iran Amid Growing Tensions

On the archipelago of Bahrain, a Sunni minority led by the al-Khalifa monarchy rules over a Shia majority. Ties between the Saudis and al-Khalifa run deep, and given Bahrain’s close proximity to Saudi Arabia’s Eastern Province, joined by the 15.5-mile (25-kilometer) King Fahd Causeway, Riyadh pays close attention to Bahrain’s stability.

As in Iraq and elsewhere, Shia gains in Bahrain are seen to be Iranian gains, and Saudi Arabia has set clear red lines to limit any concessions to the religious majority. In 2011, when pro-democracy protesters took to the streets of Manama, a Saudi-led GCC Peninsula Shield Force helped quash the protests.

In Yemen, meanwhile, Saudi Arabia has spent the best part of a year leading a multinational coalition of Arab states in an air campaign to crush a rebellion by Shia Houthi separatists, who have driven the country’s leaders into exile—and whom the Saudis are convinced receive support from Iran.

The conflict has killed thousands of civilians, but Saudi Arabia has little to show for it. The situation is complicated by a melee of actors vying for power across the sectarian spectrum, including al-Qaeda in the Arabian Peninsula, one of al-Qaeda’s oldest and most potent franchises.

And then there’s the most severe Saudi–Iranian proxy conflict: the war in Syria, which sees Riyadh and Tehran supporting different sides in a seemingly intractable civil conflict that has killed around 250,000–300,000 people and displaced around 11 million.

While Iran has long supported Bashar al-Assad’s embattled regime, the explosion of protest movements across the region in 2011 offered Saudi Arabia a chance to bring Syria back into what it deems “the Arab fold” by supporting a range of groups opposing the government—many of whom remain locked in combat with it today.

So for all that the post-execution flare-up is an alarming development, it springs from decades of mutual suspicion and violent conflict by proxy. And while the bilious rhetoric between the two countries sours by the day, it is still the people caught in the crosshairs of proxy conflicts in Syria, Yemen, Bahrain, Iraq, and Lebanon who are paying the heaviest price.

Simon Mabon is a lecturer in international relations at Lancaster University in the U.K. This article was previously published on TheConversation.com.