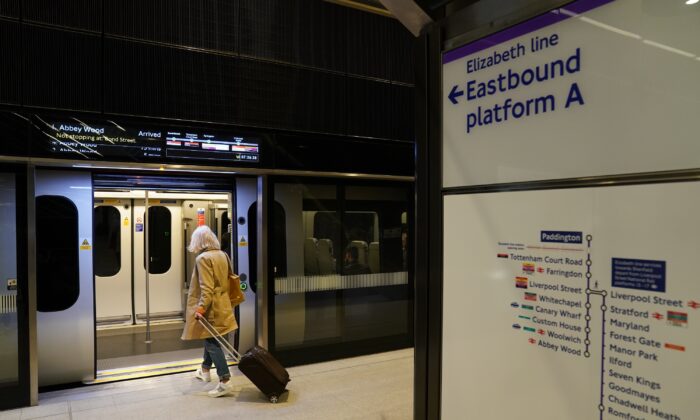 A passenger boards an Elizabeth Line train at Paddington station in London on May 24, 2022. (PA Media)
UK

Four years after it was originally due to open the Elizabeth Line—originally known as the Crossrail project—has finally opened for business and hundreds of passengers boarded the first trains.

The Mayor of London, Sadiq Khan, and his predecessor, the now-Prime Minister Boris Johnson, welcomed the opening of the line, which they both claimed would generate £42 billion ($52 billion) towards the economy.

The 73-mile-long Elizabeth Line will eventually link the university town of Reading, west of London, with Abbey Wood in southeast London and Shenfield in Essex, but initially trains are only running between Paddington and Abbey Wood.

The first eastbound train from Paddington through central London left at 6:33 a.m. and among those on board was teenage train buff Colin Kelso, from Glasgow, who wore a hoodie with the words Purple Train on the front, a homage to the new line’s mauve livery.

Kelso, 18, said: “I want to get on the first train. I’ve always liked trains and have been keeping up to date with the project.”

Clare Cenci, 43, from Maidenhead, Berkshire, was commuting to Liverpool Street and said she planned to switch from the Central Line, which was hot and crowded, especially during the summer.

The Elizabeth Line has opened just in time for the British monarch’s platinum jubilee and is the first entirely new London Underground line since 1979 when the Jubilee Line opened, two years after Queen Elizabeth II’s silver jubilee.

Sadiq Khan said: “It’s the biggest expansion in our transport network for more than 50 years. We know now they are fit for a Queen and, as importantly, fit for Londoners.”

He said the former Mayor of London, Ken Livingstone, had been the first to lobby for Crossrail and he said “credit” was due to former Prime Minister Tony Blair and his Chancellor, Gordon Brown, who gave the green light for the project.

Work on the project began in 2009 and was due to be completed in 2018 but the engineering works hit a number of delays owing to the complexity of the project.

Boris Johnson wrote on Twitter that he was “absolutely delighted” the line had opened and added: “Long-term investment in UK infrastructure pays off—with this project alone supporting 55,000 new jobs, 1,000 apprenticeships, and forecast to boost the UK economy by £42bn.”

In a television interview last week Johnson pushed the case for Crossrail 2, a £33 billion ($41 billion) north–south project which his own government pulled the funding from 18 months ago.