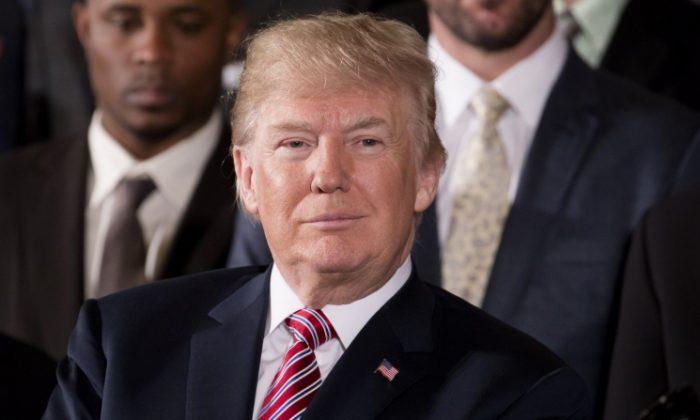 After Yearlong Probe, House Intel Finds ‘No Evidence of Collusion’ Between Trump Campaign and Russia

The House Intelligence Committee found no evidence of collusion between the Trump campaign and Russia, according to a still-classified draft report summarizing the findings of the yearlong probe.

“We didn’t find any evidence of collusion and I don’t think [special counsel Robert Mueller] will either,” Rep. Mike Conaway (R-Texas), the head of the bipartisan probe, told Fox News.

President Donald Trump celebrated the findings of the report in a Monday night Twitter message.

“THE HOUSE INTELLIGENCE COMMITTEE HAS, AFTER A 14 MONTH LONG IN-DEPTH INVESTIGATION, FOUND NO EVIDENCE OF COLLUSION OR COORDINATION BETWEEN THE TRUMP CAMPAIGN AND RUSSIA TO INFLUENCE THE 2016 PRESIDENTIAL ELECTION,” Trump wrote.

THE HOUSE INTELLIGENCE COMMITTEE HAS, AFTER A 14 MONTH LONG IN-DEPTH INVESTIGATION, FOUND NO EVIDENCE OF COLLUSION OR COORDINATION BETWEEN THE TRUMP CAMPAIGN AND RUSSIA TO INFLUENCE THE 2016 PRESIDENTIAL ELECTION.

The committee pursued four avenues of inquiry: active measures taken by Russia to interfere in the 2016 election, the government’s response to the interference, ties between the Russians and the Clinton and Trump campaigns, and alleged leaks of classified information.

The committee also disagreed with the intelligence community’s assessment that Russian President Vladimir Putin had a “supposed preference” for then-candidate Trump.

“The bottom line: The Russians did commit active measures against our election in ’16, and we think they will do that in the future,” Conaway told New York Times. But, “We disagree with the narrative that they were trying to help Trump.”

The conclusion of the House probe wraps up one of three investigations of Russian interference in the U.S. elections. The investigations by the Senate Judiciary Committee and Special Counsel Robert Mueller are still ongoing. Neither has yet produced any evidence of collusion between the Trump campaign and Russia.

“We found no evidence of collusion. We found perhaps some bad judgment, inappropriate meetings,” Conaway told reporters on Monday. “But only Tom Clancy or Vince Flynn or someone else like that could take this series of inadvertent contacts with each other, or meetings, whatever, and weave that into a some sort of fictional page-turner spy thriller.”

U.S. intelligence agencies are due to review the draft report and declassify it before it is made available to the public.

The origins of all three of the investigations of Russian interference in the U.S. elections can be traced to the notorious anti-Trump dossier composed by British ex-spy Christopher Steele. The Clinton campaign and the DNC used a law firm to pay Fusion GPS, which in turn hired Steele. Fusion GPS received money from Russia while Steele conducted his work.

Despite finding no evidence of the matters it set out to investigate, the intel committee uncovered serious abuses of government surveillance at the highest levels of the Obama administration. The committee will now redirect efforts to investigate these issues, according to a preliminary summary of the report. (pdf)