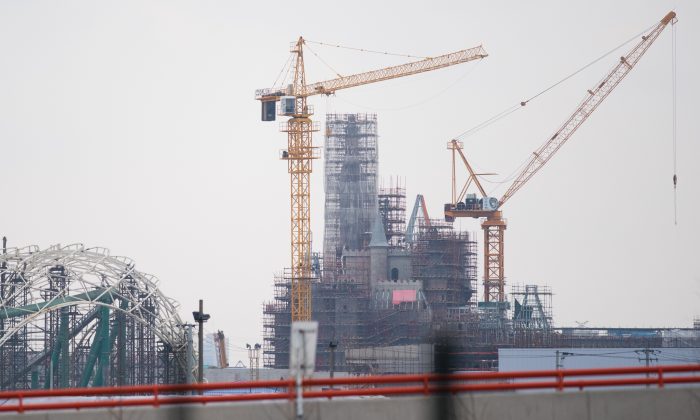 This photo taken in Shanghai on February 2, 2015, shows the castle, under construction, of the Shanghai Disney Resort's in Pudong area. (JOHANNES EISELE/AFP/Getty Images)
China

After ‘Weird Architecture,’ China Is Now Going After Foreign Names

Chinese cultural authorities have announced plans to crack down on buildings and residences with names that are too “foreign” or “strange,” as reported by state mouthpiece Xinhua.

Like the recent condemnation of “strange and impractical architecture” publicized by urban planners, the move seems to come as a reaction to the trend of giving housing complexes English or other western names like Merlin Champagne Town, Beijing Rivera, or Chateau Reglalia, to appeal to China’s urban middle class by seeming more cosmopolitan. One suburban residential community in Beijing is flat-outed called “Hometown America.”

Using names of foreign people or locations is already illegal per a Chinese law promulgated in 1996, according to the Beijing News, but the prohibition is poorly enforced. A 2014 study highlighted the decimation of traditional place names in the face of modern China’s rapid urbanization: since 1986, nearly half a million Chinese village and township names had fallen out of use, the Beijing News reported.

5 Chinese Replicas of Architecture From Around the World

Chinese Authorities Just Announced the End of Gated Communities, but the People Want to Keep Them
TOP NEWS