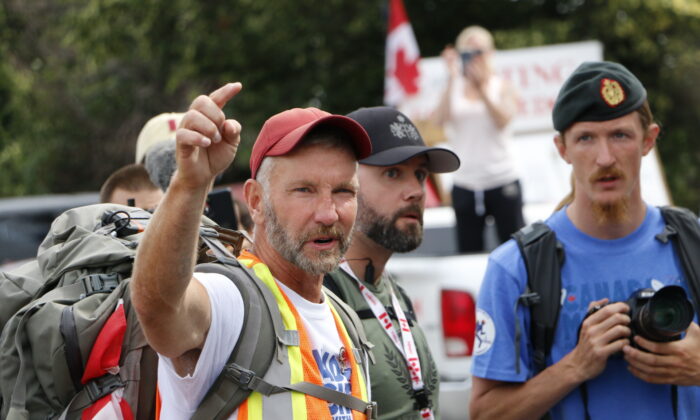 James Topp gives instructions to a group of supporters walking with him on the last day of his trek in Ottawa on June 30, 2022. (Noé Chartier/The Epoch Times)
Canada

Veteran James Topp completed his Vancouver-to-Ottawa trek last week in protest of COVID-19 vaccine mandates, but he is now assessing whether to re-embark on the journey and head further east.

“I know that I had intimated that this might go on a bit longer, and I’m not ruling it out,” Topp told The Epoch Times in an interview on July 3. “However, there are a number of personal considerations that need to be made.”

Topp says he needs to have a “personal internal conversation,” as do his team members, before deciding what to do next. Until this more in-depth reflection is completed, Topp says he won’t reveal his plans.

Topp left Vancouver on Feb. 20 and walked the 4,300 km across the country to Ottawa, arriving last week.

As a civilian in the RCMP and a military reservist, he was affected by two separate mandates. While the RCMP mandate has been suspended, the military one is still in force.

Topp is facing military charges for speaking out publicly against the mandates.

Topp arrived at the National War Monument in Ottawa on June 30 with over a thousand supporters walking behind him.

The journey ended with Topp kneeling in front of the Tomb of the Unknown Soldier.

If Topp ties up his shoes and chooses not to march east, he says it may not end his advocacy work. The veteran is considering getting involved with the Canadian Citizens Coalition, an umbrella organization of various groups advocating for civil liberties.

“This is also something that weighs heavily on my mind,” Topp said in reference to continuing advocacy.

Topp counted as a major accomplishment the meeting he was able to have with MPs in Ottawa on June 22.

“This is something I think is an antidote to an imbalance right now,” he said.

Topp has met many Canadians along the way who greeted him, thanked him, and offered support. The Epoch Times witnessed many vehicles pulling over with drivers coming to shake hands with Topp during his 27 km walk from Dunrobin to Bells Corners, Ontario, on June 29.

“Thank you. We really appreciate what you’re doing,” a tearful lady told Topp during a rest stop.

As Topp and a group of 20 supporters walked by a construction site in Kanata, one young worker said “James Topp is a legend! In fact, you’re all legends, and James is the leader!”

These sporadic events became the norm as Topp got closer to downtown Ottawa, with supporters growing from hundreds to over a thousand walking behind him.

“It was a pretty surreal experience, I kind of wasn’t prepared for it. I had anticipated there would be some level of interest, but in another way, I was also not prepared for that level of involvement in it,” Topp said.

“I’m still in a state of letting it all sink in,” he added. “This is probably the most remarkable experience of my life, so it’s not like anything I could just take on board without a little bit of reflection.”