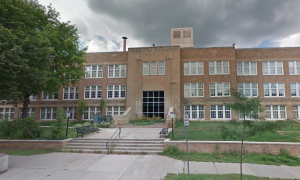 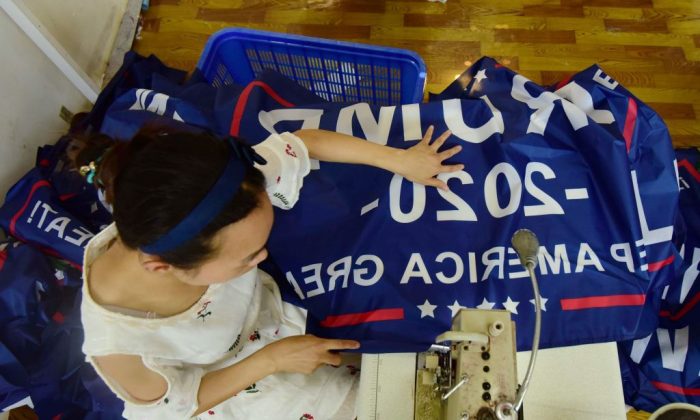 A woman sews a Trump 2020 flag in a file photo. (AFP/Getty Images)
US News

The family of President Donald Trump sent a military veteran and Trump supporter a replacement flag after two hooligans burned the one he was flying.

Gus Klein of Burlington, Vermont, woke up one day in November to find that his “Trump 2020” flag had been removed from his flagpole and partially burned.

After the incident, Klein said that type of harassment isn’t right, but that it wouldn’t stop him from supporting Trump.

“It’s not going to stop me for believing in who, and campaigning for who I believe is right for the United States,” he added.

Several weeks later, two teenagers who weren’t identified due to being juveniles (14 and 15 years old respectively) were arrested on suspicion of burning Klein’s flag, the Burlington Police Department said.

The parents of the teens helped in the investigation that led to the apprehensions; the teens were sent to an alternative justice program due to their age.

Klein said he welcomed the news but also reiterated to the Burlington Free Press that he’s open to talking about his views to anyone who knocks on his door, despite getting death threats from some people over his support for Trump.

Shortly after the news broke of the flag burning, Trump’s son Eric Trump posted about the story on Twitter and said the family was sending Klein a replacement flag for free. That flag ended up not arriving but after Klein called the Trump campaign headquarters, he found a package at his door the next day.

In addition to a new “Trump 2020” flag, it contained other flags, shirts, bumper stickers, and a “Make America Great Again” hat signed by President Trump and Vice President Mike Pence.

“This is going to be like a family heirloom,” Klein told WCAX.

He said that he’s received phone calls from people threatening to kill him and that someone ripped off his Trump bumper sticker when he was parked in Richmond. But his wife, Ann-Marie Klein, said that the couple hopes people can respect their political views, even if they don’t agree with them.

“I still have faith in people and Vermonters letting us fly our flag freely without any issues or problems,” Ann-Marie Klein said.

"We have the right to raise our flag and support the candidate of our choice," Gus Klein said. "And we should be able to do that without intimidation." https://t.co/4POwyfEJV8

The Kleins held a flag-raising event on Jan. 12, attracting a crowd of about 75 people.

He said he was holding an event to exercise his free speech and stand up against those who had threatened him and his family.

“So one will ask, why the flag raising ceremony? Why make it such a big deal? It was only a flag. I’ve heard, it was only a flag, get over it. Well, here’s why. Because I can.” Klein said.

Prior to the ceremony, he said: “We have the right to raise our flag and support the candidate of our choice. And we should be able to do that without intimidation or fear or shame about doing that. That’s what I hope to put out for a message today.”

During the ceremony, several cars drove by with words painted on them, such as one that stated: “Racists go to hell” and “Trump sucks.” The driver was shown making an explicit gesture at the crowd.

Burlington Police Department officials told WCAX that they gave the driver a verbal warning for his actions.