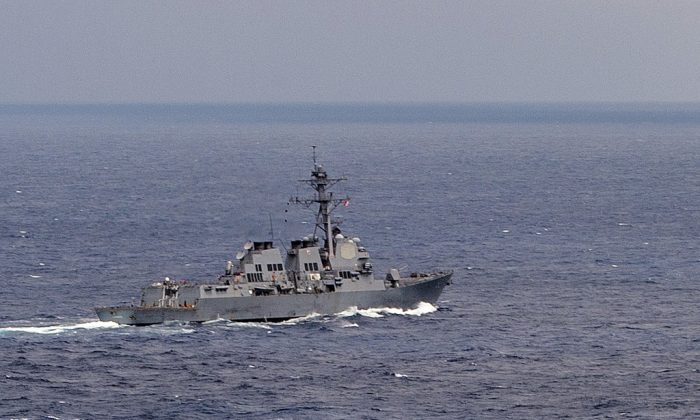 The Chinese regime was quick to mobilize its own forces after the U.S. Navy sent the USS Lassen destroyer late Monday to patrol within 12 nautical miles of China’s man-made islands in the disputed South China Sea.

Rather than send warships or jets, however, the Chinese regime mobilized a very different system—its vast network of propaganda agents, state-run news outlets, and systems to control the flow of information.

The response highlights the approach the Chinese Communist Party (CCP) has built to fight modern conflicts. It uses what the Pentagon has branded a “non-kinetic” form of fighting, which targets human perception and forms the CCP’s core strategy for taking the South China Sea.

Almost all the CCP’s propaganda channels use an identical line.

Soon after the U.S. exercise, more than 200 million users of the WeChat smartphone messaging app in China received a message on their news feeds, obtained by Epoch Times, which claimed the U.S. military “illegally” entered “China’s South Sea.”

The message appears to reflect the line being pushed out by the CCP’s propaganda arms, and is designed to instill notions that what the United States did was both aggressive and illegal, built on the concept unrecognized by other nations that the CCP is right to have a military perimeter around the man-made islands.

A similar line was picked up by the Chinese news program, “Xinwen Lianbo,” which is the most watched and most heavily controlled news program in China. Andrew Chubb, a doctoral candidate in International Relations, wrote on his “South Sea Conversations” blog that the program, which airs on the state-run CCTV, “carries the Party Line to the masses.”

The show’s host states the U.S. warship “illegally” entered waters near “China’s relevant islands and reefs in the Spratly archipelago.”

Similar to China’s state-run Xinhua news outlet, Chubb notes the CCTV program presents the CCP’s general line on a topic and “legitimizes other media to focus on the issue.”

He wrote, “This must reflect a choice by the ruling party that it wants the issue near the top of the broad public’s agenda, at least in the short term.”

The CCP has been hard at work for the last two years dredging sand, and pumping it onto reefs and shallow waters in the Spratly Island and Paracel Island chains of the South China Sea.

Using this method, it has built five artificial islands in the South China Sea, which it now claims as Chinese territory. Despite the fact that the Spratly Islands, in particular, are close to 1,000 miles south of China’s southernmost point on Hainan Island, the CCP claims an unofficial defensive perimeter around the man-made islands, which other nations largely do not acknowledge.

To challenge these claims, the United States is holding “freedom of navigation” exercises, meant to ensure that international ships can still pass freely through the South China Sea.

The Chinese response to these exercises closely follows the CCP’s main strategy in the South China Sea, which the Pentagon and U.S. defense experts have previously detailed.

The Chinese regime calls this strategy the Three Warfares, which consists of media warfare, psychological warfare, and legal warfare.

The system technically breaks down propaganda into three roles: one to control what’s being said in the press, another to target the psychology of their adversaries, and a third to validate their claims by manipulating international laws.

A defense contractor report, produced for the Office of Net Assessment, a Pentagon think tank, detailed the strategy. The 556-page report from May 2013 was broadly cited by various news outlets around March 2014, and detailed one of the CCP’s key strategies for political warfare designed to push the United States out of the Asia–Pacific region.

“The Three Warfares is used by China to project psychological pressure, publicize ‘legal’ arguments and to assert China’s claims to resources and territory in regions ranging from the East and South China Seas to the Poles,” states the report.

It describes the strategy as a “war-fighting process that constitutes war by other means.” Its design hinges on deception, with a goal to “alter the strategic environment in a way that renders kinetic engagement irrational.”

In the recent event, the CCP revealed the secret of its strategy: it isn’t fighting over the South China Sea with military strength. It’s fighting with propaganda.

Its goal is to paint the CCP as a victim, the United States as an aggressor, and the CCP’s neighbors as unreasonable.