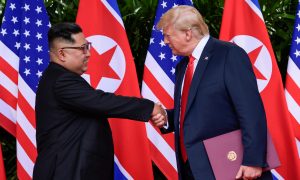 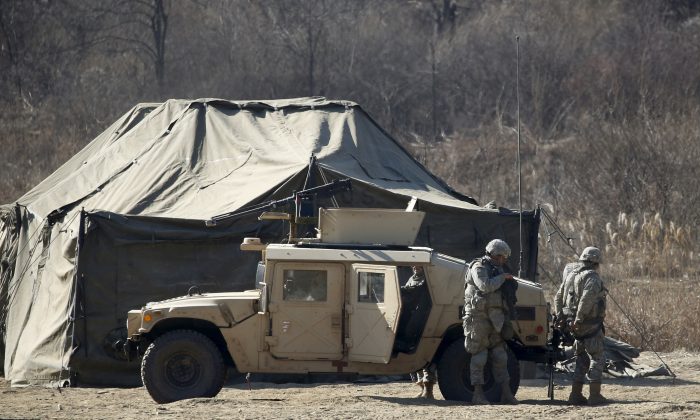 After Trump’s Demand, South Korea Signs Deal to Pay More for US Troops

South Korea will pay $60 million more for the upkeep of U.S. troops on its territory—this after President Donald Trump demanded that Seoul boost its contribution. The two nations inked a short-term deal on Feb. 10 increasing South Korea’s annual bill by 6.75 percent to $890 million.

On the campaign trail, Trump promised U.S. voters that he would fight to secure fair deals for the United States on the world stage. America’s NATO allies have boosted military spending by $100 billion after similar demands from Trump.

The South Korean Parliament has to approve the agreement before it becomes final. Unlike prior deals, which have lasted five years, the one signed on Feb. 10 expires in one year. Bargaining for 2020 funding is likely to restart in months.

“It has been a very long process, but ultimately a very successful process,” South Korean Foreign Minister Kang Kyung-wha said at a meeting before another official from the foreign ministry signed the agreement.

The U.S. State Department’s senior adviser for security negotiations and agreements, Timothy Betts, met Kang before signing the agreement on behalf of the United States and told her the money represented a small but important part of South Korea’s support for the alliance.

“The United States government realizes that South Korea does a lot for our alliance and for peace and stability in this region,” he said.

About 70 percent of South Korea’s payment funds the salaries of some 8,700 South Korean workers who provide administrative, technical, and other services for the U.S. military. Late last year, the U.S. military had warned the South Korean employees on its bases that they may be put on leave from mid-April if no agreement was reached.

Seoul and Washington have held 10 rounds of talks since March, amid Trump’s calls for South Korea to pay more. South Korean officials pushed for a three-year deal keeping their annual contribution around $864 million. U.S. officials demanded as much as $1.2 billion per year.

The allies worked to finalize an agreement in order to minimize the impact on South Koreans working on U.S. military bases, and focus on nuclear talks ahead of a second U.S.–North Korea summit, Seoul officials said.

On Feb. 10, South Korea’s Foreign Ministry said that the United States had affirmed it would not be changing the scale of its troop presence.

During his annual State of the Union Address on Feb. 5, Trump announced that he will meet with North Korean leader Kim Jong Un for a second time on Feb. 27-28 in Vietnam. The two leaders held their first unprecedented meeting in June last year in Singapore.

The Singapore summit resulted in a joint agreement in which Kim committed to denuclearize his nation, pursue peace with South Korea, establish relations with the United States, and repatriate the remains of American soldiers. After the meeting, Trump suspended major joint military exercises with South Korea. Since the summit, Pyongyang has not tested any nuclear weapons or ballistic missiles.

South Korean President Moon Jae-in plans to discuss the upcoming summit with Trump soon, according to a spokesman from the Blue House. The spokesman, Kim Eui-kyeom, also confirmed that officials from Pyongyang and Washington plan to meet next week in an unspecified Asian country.