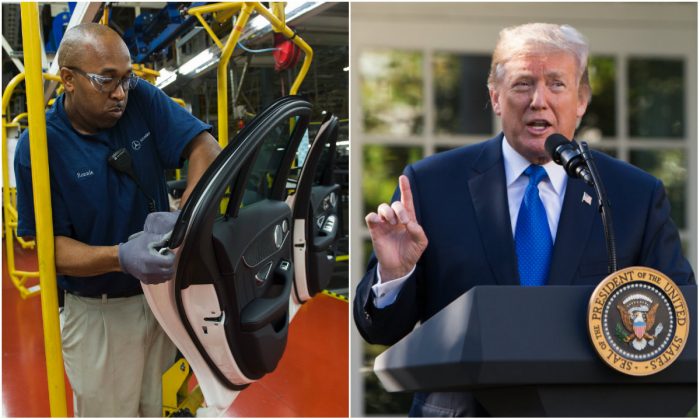 L: An employee at the Mercedes-Benz US International factory in Vance, Ala., on June 8, 2017. (Andrew Caballero-Reynolds/AFP/Getty Images); R: President Donald Trump in the Rose Garden of the White House in Washington, D.C., on Nov. 2, 2017. (Samira Bouaou/The Epoch Times)
Trump Administration

After Trump Tax Cuts, Economy to See Boost Not Seen in 15 Years

America’s economy will get a boost of 3.3 percent this year, between the fourth quarter of 2017 and fourth quarter of 2018. Such an uptick in gross domestic product (GDP) has rarely been seen in the past two decades. And it’s coming mainly due to President Donald Trump’s tax cuts, according to the Congressional Budgeting Office (CBO).

Such a 4Q-to-4Q increase has not been topped since 2003 when GDP swelled 4.4 percent during the recovery from the 2001 crash, based on data from the Bureau of Economic Analysis.

“CBO significantly boosted its projections of the growth of real GDP in 2018 and 2019, mostly because of the recent changes in fiscal policy,” the agency stated in its Budget and Economic Outlook: 2018 to 2028 released April 9.

“Some of the difference in near-term growth also reflects growth in the U.S. economy in the second half of 2017 that was appreciably stronger than expected.”

CBO usually issues its predictions in January, but this time it waited to include the effects of major legislation: the tax cut act (Public Law 115-97), the Bipartisan Budget Act of 2018 (P.L. 115-123), and the Consolidated Appropriations Act, 2018.

“The largest effects on GDP over the decade stem from the tax act,” CBO stated, estimating the average annual boost at 0.7 percent.

The other two acts also boost the economy in the short term of this and next year, but they also increase budget deficits that “are estimated to reduce the resources available for private investment, lowering GDP in later years,” the agency stated.

However, he lamented concessions made to get Democratic votes. “Had to waste money on Dem giveaways in order to take care of military pay increase and new equipment,” he tweeted on March 22.

Got $1.6 Billion to start Wall on Southern Border, rest will be forthcoming. Most importantly, got $700 Billion to rebuild our Military, $716 Billion next year…most ever. Had to waste money on Dem giveaways in order to take care of military pay increase and new equipment.

The economy has benefited from the tax cuts even before they materialized since expectation that Trump would deliver them boosted confidence in the economy. While in the first quarter of 2017 the GDP grew 1.2 percent, the rate jumped to 3.1 percent in the second quarter and 3.2 percent in the third, despite the damage of three strong hurricanes coming in short order. The growth then slowed down to 2.9 percent.

While the CBO expected some increase, a part has been attributed to the “Trump effect,” mainly stemming from expectations of his cutting regulations, taxes, and investing in infrastructure. Trump has so far delivered the tax cuts and continues to deliver on deregulation. His infrastructure proposal, however, is still in the planning stages.