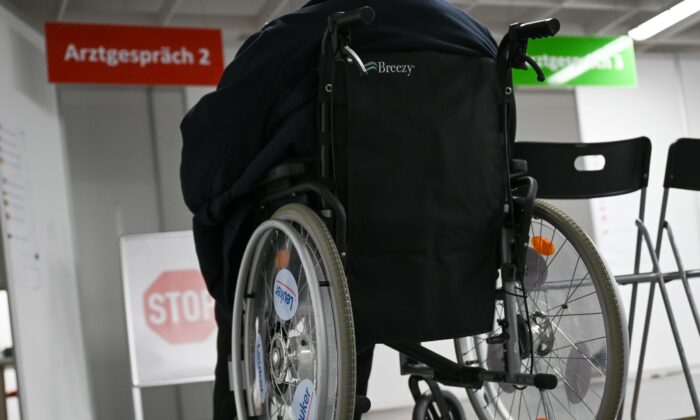 A woman in a wheelchair in Heuchelheim, Germany, on Jan. 21, 2021. (Arne Dedert/Pool/AFP via Getty Images)

What comes after transgender? It’s an important question. We know the transgressive cultural revolution is never-ending. Thus, once biological men can instantly identify as women and biological women as men—and bind society to accept their self-definition, or else!—the revolution will look for other norms to devour.

That next degeneration is already gestating—people who want healthy limbs amputated or other normal body functions disabled. Known as Body Integrity Identity Disorder (BIID), able-bodied people with this (still) mental illness obsess that their “true” self is disabled.

BIID is an awful and agonizing condition. These anguished people believe that by removing healthy limbs, snipping spinal cords, or causing the loss of sight—as the case may be—they would live fulfillingly as their true selves.

These sufferers deserve our empathy, support, and intensive mental health interventions. But it should go without saying—but no longer can—that doctors should never be allowed to remove healthy limbs or snip spinal cords, which would be, by definition, to cause harm in contravention of the Hippocratic Oath.

But alas, the concept of “harm” is becoming increasingly malleable; witness the transforming of euthanasia/assisted suicide to a “medical treatment” from a crime. Moreover, BIID sufferers have learned from the triumph of transgender advocacy and now often refer to their condition as “transabled.” (Get it?)

BIID activists have noticed the overwhelming success transgender activists achieved in persuading the medical establishment to bless surgically removing the healthy genitals of transgendered individuals, inhibiting natural puberty in children diagnosed with gender dysphoria—even perform mastectomies on teenage girls who identify as male. So, the question is being asked: Why should transgendered people be allowed to have their bodies fundamentally altered based on their self-identified gender, while transabled people—who believe similarly that their true identity is as a disabled person—can’t receive similar relief?

If there is a logical distinction, I can’t think of what it might be. Not only that but defining one’s personal identity became a fundamental right in the same-sex marriage case Obergfell v. Hodges, in which Supreme Court Justice Anthony Kennedy ruled: “The fundamental liberties protected by this [Due Process] Clause include most of the rights enumerated in the Bill of Rights. In addition, these liberties extend to certain personal choices central to individual dignity and autonomy, including intimate choices that define personal identity and beliefs.”

That includes sexual orientation, which is why Kennedy ruled that same-sex couples have a constitutional right to marry. But Kennedy’s words can’t be limited to issues of sexual attraction. Indeed, “choices that define personal identity and beliefs” contain no logical boundary lines at all.

Principles and lexicon have become shape-shifters, leading to a constant deconstruction of societal norms in which it is almost impossible to keep up. Thus, leapfrogging from Obergfell, the Supreme Court ruled 6–3 last year that the term “sex” in Title VII of the Civil Rights Act isn’t limited to the objective biological understanding of the term, but also encompasses sexual orientation and identification—even though that wasn’t the understanding of the Congress when the bill was passed.

If the essential meaning of sex can be so fundamentally redefined with the snap of a finger, why not expand the meaning of “disability” to also encompass the “transabled?” This argument is finding sympathetic—although certainly not unanimous—reception in the bioethical discourse. For example, last year, University of Manchester bioethicist Richard B. Gibson argued in the Journal of Bioethical Inquiry that healthy limbs of people with BIID could ethically be amputated because doing so wouldn’t cause a “disability,” but rather, an “impairment.”

What’s the difference, you ask? Gibson and some in academic disability studies believe that disability shouldn’t be viewed mechanistically—i.e., if one can’t walk or see, that person has a disability. Rather, they advocate a “social disability model,” in which disability is a wrong “imposed” by society on the individuals with “impairments,” such as through social isolation and failure to accommodate “atypical needs.”

Thus, Gibson argues, “the imparting of impairments on previously unimpaired individuals could be ethically permissible” since the amputation wouldn’t actually disable the affected individuals.

It isn’t just the “learned” journals. Popular media has also begun to take up the cause, often advocating for permitting surgeons to remove healthy limbs. Then, there was the uncritical story of Jewell Shuping, a woman with BIID who self-identified as blind–and a psychologist helped take away her sight by dripping a caustic substance into her eyes, and now, she is “happier than ever.” Good grief, even Today’s Parent got into the act as the mother of a child with cerebral palsy concluded that it’s “inclusive” to accept people voluntarily creating the circumstance in which they must use a wheelchair.

We are entering a world in which only the subjective matters. Among other harms, this is leading to the medical disciplines being reconceived and redefined into technocratic functionaries in the service of radically individualistic, and entirely subjective “how I feel” ideologies.

Unless this cultural moral bleeding is staunched, I give it 10, maybe 15, years before disabling surgery is permitted in Western hospitals—all covered by health insurance or government benefits. What the next step will be beyond the social acceptance of transablism is more than I can imagine.

Award-winning author Wesley J. Smith is the chairman of the Discovery Institute’s Center on Human Exceptionalism.

Wesley J. Smith
Award-winning author Wesley J. Smith is host of the Humanize Podcast (Humanize.today), chairman of the Discovery Institute’s Center on Human Exceptionalism and a consultant to the Patients Rights Council. His latest book is “Culture of Death: The Age of ‘Do Harm’ Medicine.”