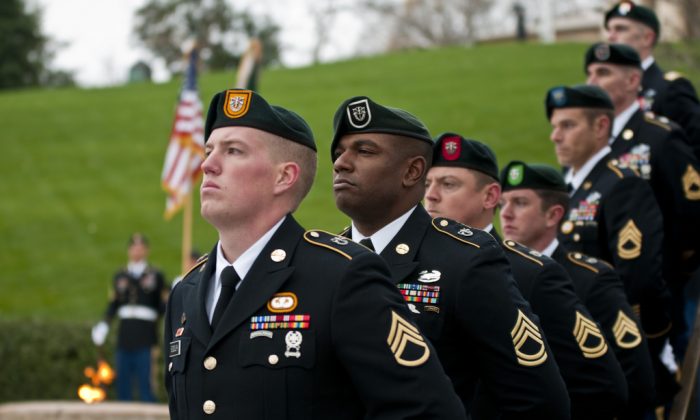 Soldiers from each of the U.S. Army’s Special Forces groups stand silent during the wreath-laying ceremony at the grave of President John F. Kennedy at Arlington National Cemetery on Nov. 17, 2011. (U.S. Army)
US Features

After Tragedy in Niger, Former Green Beret Tells of Loss, Self-Sacrifice, and Valor

When a Green Beret loses his life in combat, his entire company of men will often share in the loss. The soldiers take responsibility for the wife and children of their friend. They call the soldier’s wife, mother, and father and ensure his children know the values he gave his life to uphold.

“When you lose a guy in your company, that Green Beret’s wife becomes a part of that community. They really become part of the unit’s life as well,” Chris Erickson, a contributor at the national security and public policy website OpsLens and a former Green Beret.

“They still come to events and memorial services, and sometimes you see these kids who may not even be old enough to have memories of their father growing up, and you’re trying to impart that legacy, trying to keep their father’s legacy alive,” he said.

Erickson recalled a deployment in which a soldier he was mentoring died in combat, and he called the man’s wife to check on her after she had been informed of her loss. He said, “It was one of the hardest things in the world, talking to her on the phone while we were still in the country, still in the combat zone, and her telling us to be strong.

“These wives of some of these service members, they’re just made of steel with the amount they’re taking on.”

The phone calls that troops, commanders, and occasionally presidents make to the families of men and women killed in combat have recently been in the headlines. Erickson says that making those calls is “the hardest thing for any commander to do, all the way up to the commander-in-chief.”

The widow of a Green Beret killed in an ambush by terrorists in Niger became the focus of a recent political spat, after Rep. Frederica Wilson (D-Fla.) listened in on a condolence call made by President Donald Trump to the grieving woman. Wilson spread rumors among the press that Trump had been disrespectful.

At the end of the day, I wish people would stop politicizing the loss of our service members at a micro level.
— Chris Erickson, former Green Beret

A flurry of news articles followed attacking Trump and his calls to families of fallen troops, alongside reports that characterized the training mission in Niger as a “shadow war.” In a video, Wilson proclaimed herself a “rockstar” for the attention her comments garnered.

The controversy subsided after Michelle Black, widow of Sgt. Bryan Black, came out herself to say she appreciated Trump’s call. She told Fox News on Oct. 26, “I’m very grateful that he called, and he spoke to the kids. I think just the excitement from that made it a little better, even if it was just for a minute. … He was very gracious, and I appreciate anyone who calls, because, like I said, that takes quite a bit of bravery to call into that kind of situation.”

While noise around the situation is dying down, it hit a sore spot with many veterans and others who respect the men and women who give their lives for the United States and its principles. White House Chief of Staff Gen. John Kelly said in an Oct. 19 press briefing that this sacredness was “eroded a great deal yesterday by a selfish behavior of a member of Congress.”

Erickson says the fact that a woman losing her husband, a soldier losing his life, and a president attempting to console her have all been politicized has only added to the tragedy.

“At the end of the day, I wish people would stop politicizing the loss of our servicemembers at a micro level,” he said. “By all means, have discussions and investigations into what happened to avoid this sort of thing from happening next time, but please don’t drag grieving families into it.”

The U.S. military has bases and operations in most countries around the world. According to Pew Research, in 2016 the number of active-duty U.S. military troops stationed overseas dipped below 200,000 for the first time in 60 years.

The numbers dropped significantly elsewhere, yet the United States does maintain active-duty troops in other parts of the world, including 2,581 stationed in Sub-Saharan Africa.

While many news outlets were playing up the idea that the United States has special forces troops in Niger, Erickson noted that “that’s what Green Berets do: We train other forces.”

“At any given point we’re over the world training our partners so these attacks don’t happen in these countries and so the terrorists don’t have a safe place to operate,” Erickson said.

“It can be something as simple as a counternarcotics mission in South America to eliminate funding for narcoterrorism, to training Thai commandos to combat insurgents—Maoists who want to overthrow the kingdom of Thailand and instill a state built on terrorist values.”

There are many quiet conflicts that U.S. Army Special Forces are engaged in, Erickson said, which are meant to “not let these insurgent and terrorist groups overthrow their governments and instill their will against their people.”

While U.S. operations to fight terrorism under Operation Enduring Freedom have been heavily focused on Iraq and Afghanistan, the operation was never limited to those countries—and U.S. support and training for local forces has aimed to ensure the conflicts in various countries haven’t turned into full-scale wars.

Erickson noted the anti-terrorist operations of the United States in the Philippines have included training with the Philippine army and operations to counter local terrorist groups, including ISIS affiliate Abu Sayyaf.

“There are a lot of bad people in a lot of places wanting to do harm to the United States,” Erickson said. “If we’re not there training, it will turn into real conflict.”

The Cause of Freedom

He added, however, that while the mission in Niger may not have been part of a full war, it doesn’t diminish the sacrifice made by Black and others who were recently killed in the terrorist ambush.

The Green Berets and other members of U.S. special forces are a unique breed who regularly go above and beyond the call of duty.

The official motto of the Green Berets is “De oppresso liber,” which means “To liberate the oppressed,” and Erickson said this is a motto that many of the men stand by.

With this motto at heart, he said, many Green Berets have given their lives “for people who don’t look like you, who don’t have the same culture as yours—to be willing to go and lay down your life basically for strangers because you believe that freedom is one of the greatest causes that all men deserve is something we take pretty seriously.”

“I have seen men do things under fire that on paper completely defy logic or any sense of self-preservation,” he said.

He noted a battle at a base where he was stationed in Afghanistan. Explosions erupted from suicide bombers, then terrorist gunfire lit up the base. Many of the allied troops ran from their bunkers in confusion, “but a handful of Green Berets and security personnel grabbed their guns and charged the line to repel the threat in fairly short order.”

For most people, he said, when they hear explosions and gunfire, “they’re going to run for cover and find somewhere safe, and that is not the reaction of a Green Beret.”