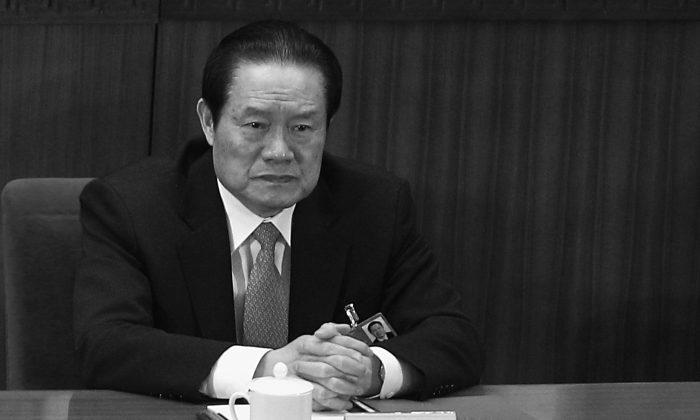 The life sentence given to Zhou Yongkang, the once powerful security chief in China, marks a key moment in Communist Party leader Xi Jinping’s wresting power over the regime apparatus, and his elimination of dangerous political opponents—but it’s likely not the end of the process.

Among the group of officials that Xi has stripped of power, isolated, arrested, and had prosecuted—all necessary actions in the context of Chinese Communist Party politics—Zhou Yongkang is not yet the top of the totem pole. There are two more men above him.

Zhou owes his entire career to Jiang Zemin, the regime chief in name from 1989 to 2002, and in fact far beyond that time. And Jiang, during that period, relied heavily on the wiles of his secretive adviser and political mastermind, Zeng Qinghong.

These two men remain at large, and if Xi Jinping’s campaign of political cleansing is to deepen, Jiang and Zeng would be the final targets.

At the Tianjin No. 1 Intermediate People’s Court in northern China, Zhou said:  “I have acknowledged the fact of my crimes, and the loss that was caused to the Party’s mission. Hereby I am pleading guilty and I am regretful of it.”

Zhou said he would not appeal the verdict, which could have carried a death sentence.

The fact that Zhou has chosen not to appeal indicates that he has gotten some degree of satisfaction with the result, says Epoch Times commentator Zhou Xiaohui.

“The Chinese regime and Zhou must have made a deal for the Chinese regime to turn a blind eye to his other crimes, such as murdering his wife, plotting a coup against the Party, and facilitating live organ harvesting,” Zhou Xiaohui said.

In 2002, Zhou reportedly murdered his wife by engineering her death in a car accident. Several reports say that the car that hit her had a military plate. One year later, Zhou married Jia Xiaoye, former anchor and journalist for the state-run Chinese Central Television. She is 28 years his junior.

As to what deal Zhou may have made with the regime to negotiate for his life, Zhou Xiaohui said that “Zhou might have exposed the [crimes] of a certain political heavyweight or a few powerful officials as a sign that he had performed a good deed for the Party.”

Based on Zhou’s former position, if Zhou turned on any powerful officials, they could only be either Zeng Qinghong, Jiang Zemin, or both.

Zeng used to be China’s Vice Premier and a member of the Politburo Standing Committee, the small group of officials who control the country, while Jiang was general secretary of the the Communist Party and the most powerful man in China.

For Xi Jinping, there is no limit when targeting tigers [colloquial term for a high-ranking corrupt official],” said Li. “Such a  campaign will continue on to affect officials within the Standing Committee, and eventually bring down former Party head Jiang Zemin.”

Li believes the net is tightening around Zeng and Jiang. But if they try to use their waning power in any sort of desperate counter-action against Xi, a swift blow could bring them both down.

“Punishing Jiang in accordance with the law has become the clear path ahead,” Li said.