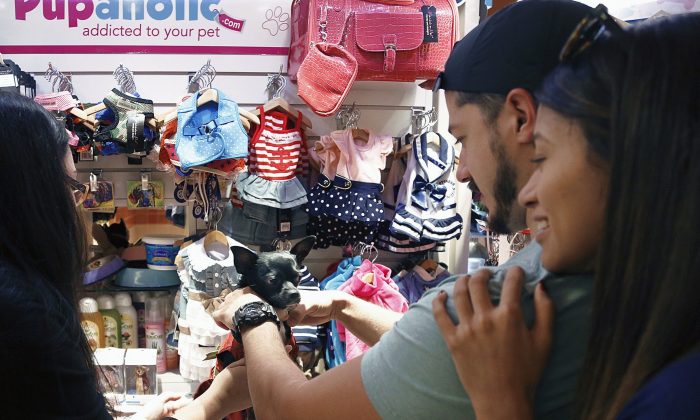 Lourdes Landa, 32, left, assists Ivan Marcano, 27, and his girlfriend, Barbara Moreno, 27, as they shop for clothes for their dog, Luna, at Dolphins Mall on Thursday, Nov. 24, 2016. (Carl Juste/Miami Herald via AP)
US

After the Turkey, Some Hit the Shops to Start Holiday Season

NEW YORK—After enjoying the Thanksgiving turkey, some Americans hit the stores for what retailers hope will be a new tradition to start the holiday shopping season.

Throngs of shoppers lined up at Macy’s Herald Square in Manhattan for its evening opening, looking for deals, and Target estimated hundreds were waiting outside a store in Jersey City, New Jersey. The competition to grab customers first is keen.

“It’s manic. It’s crazy, but it is fun,” said Maria Elfes of Sydney, Australia, who was at Macy’s. It was her seventh visit to New York but her first time shopping on Thanksgiving.

Lots of stores are offering the same deals as in previous years, like $19.99 boots that remain a big attraction, cashmere sweaters, and sheets. For some shoppers, electronics at a big discount was the draw.

“Televisions, man, televisions. Beautiful big screens so I can watch sports,” said William Junkin, a recently retired longshoreman shopping at Best Buy in Howell, New Jersey. “I’m hoping to buy two of them, and I saw they had some real good prices, so maybe I’ll splurge on some other stuff as well.”

Martin McDuffie, 34, came to a Walmart in suburban Columbia, South Carolina, for just one thing—a 60-inch television for $398. He’s been saving to replace his 32-inch TV.

“This is going to be a big upgrade,” McDuffie said.

Other items that drew crowds at the store were cellphones, bargain DVDs and video games and Hatchimals—eggs with a small, animated animal inside that hatch when given attention.

As the beginning of the holiday season creeps ever earlier, retailers have been offering discounts on holiday merchandise since late October. The start used to be the day after Thanksgiving, but many mall operators and the big stores that anchor them are sticking with going earlier.

“Most of the time Black Friday deals start the day of: Thanksgiving,” said Ashley Shelton of Columbia, Missouri, who was as Kohl’s with her boyfriend after dinner with family and then going to Walmart for a Roku and security cameras. “So tomorrow we’re not really going to do as much shopping. Shopping starts on Thursday.”

Target CEO Brian Cornell, who was at the store in Jersey City, told The Associated Press he’s encouraged by early reports from stores around the country, and cited lower food and fuel prices and a solid job market as reasons to be optimistic. “It’s really a good time to be a consumer,” said Cornell.

Hot items online and in the stores were sleepwear, Apple products and board games. Shoppers also filled their carts with items besides doorbusters, like holiday trees and high-end chocolates.

“They were up and down the aisles,” Cornell said. “They took time to shop.”

Leslie Lopez, a project coordinator from Jersey City, was pushing a cart of “Star Wars” and “Frozen” toys. Her friend Bariah Watt bought a Samsung TV for $247, slashed from about $400, but had no luck finding the white-hot Nintendo NES Classic system, originally priced at $60.

Watt says she would have paid several hundred dollars on eBay or other sites to get her hands on it. “I’m a Nintendo kid,” she said. “It takes me back to my childhood.”

But many workers complain that stores are putting profits over workers’ time to be with their families, and some shoppers vow never to shop on the holiday.

At the Walmart in suburban Columbia, Tonjua Calhoun had studied the 36-page ad carefully and planned to buy a pressure cooker, some sheets, and a portable DVD player. Calhoun, 52, also planned to go to J.C. Penney and maybe Target. But she wishes they were after-Thanksgiving sales.

“I think they ought to give everyone a whole day with their families,” Calhoun said. “It was a lot more fun when you woke up Friday, grabbed an early breakfast and went all day.”

Some stores believe it’s not worth opening on Thanksgiving since the sales are spread out. Consumer electronics chain hhgregg Inc. and the Mall of America in Minnesota are closed on Thanksgiving after opening on the holiday in the past.

The National Retail Federation, the nation’s largest retail group, expects holiday sales to rise 3.6 percent for November and December, better than the 3 percent growth seen for those months last year. That excludes car sales, gas and restaurant receipts but includes online spending and other non-store sales like catalog spending.

This weekend is crucial to set the tone for the season. Around 137 million people plan to or are considering doing their shopping during the Thanksgiving weekend, according to a survey conducted for the NRF. That includes online and store shopping. Black Friday, the day after Thanksgiving, vies with the Saturday before Christmas as the busiest shopping day of the year.