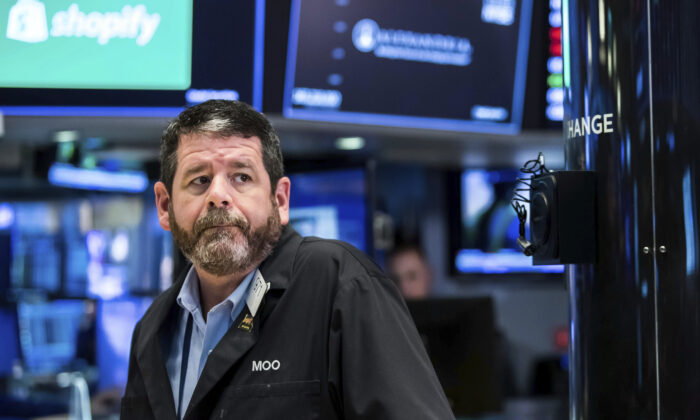 The Dow Jones Industrial Average plunged by more than 800 points, the S&P 500 dropped by nearly 3 percent, and the Nasdaq Composite Index plummeted by more than 400 points.

Treasury yields were green across the board, with the benchmark 10-year yield up by nearly 13 basis points to 3.17 percent. The two-year note also climbed by 22 basis points to a 14-year high of at least 3 percent.

Traders also poured into the greenback as the U.S. Dollar Index (DXY), a gauge of the dollar against a basket of currencies, rallied past 104.00 on June 10.

Investors responded to the consumer price index (CPI) soaring to a 40-year high of 8.6 percent in May, topping market forecasts of 8.3 percent. Markets ostensibly believe that the U.S. central bank will be more hawkish on policy tightening.

“Hopes for a September ‘pause’ have evaporated,” Hoffman said.

“The Federal Reserve must demonstrate progress on inflation. High data prints are painful and leave noses bloody at the Federal Reserve and White House. Continued high inflation does nothing to decrease anxiety and volatility in capital markets, forcing investors to grapple with the three-headed monster of inflation, recession, and monetary policy.”

According to Ed Yardeni, president of Yardeni Research, the intense selloff is “signaling that investors now expect that the Fed will have to raise the federal funds rate by another 200bps over the next 12 months.”

“The 10-year yield remained around 3.10 percent, suggesting that the yield curve is anticipating a significant economic slowdown, which will lower inflation,” Yardeni wrote in a note to clients.

“We think the U.S. central bank now has good reason to surprise markets by hiking more aggressively in June,” he wrote in a note to clients.

A new Reuters poll of economists suggests that the Fed will put together four consecutive half-point rate hikes, with no rate pauses until next year.

Two-thirds of survey participants anticipate a quarter-point increase in September. One-quarter believe the FOMC will pull the trigger on a 50-basis-point rate hike.

Looking ahead, Mohamed El-Erian, a top economist and chief economic adviser at Allianz, anticipates that next month’s headline figure will be worse than the June month-over-month reading.

“Amplifying the economic/social/political discomfort, headline is a new high for this inflation cycle,” he wrote on Twitter on June 10. “Also, if the first 10 days of June are anything to go by, the next monthly measure would be higher.”

In addition to more interest rate hikes, the odds of a recession have increased in the wake of the CPI data, according to Nancy Tengler, CEO and CIO at Laffer Tengler Investments.

“The numbers are catastrophically bad for Americans and the policy makers in Washington,” she wrote in a research note. “As we have been arguing this is sticky, persistent inflation that will take years to work out of the system.

“Futures sold off as the numbers were digested and the yield curve flattened. Odds of a recession in 2023 have gone up in our estimation.”

Although Tengler is optimistic about consumers since employment is high and they have accumulated savings from the COVID-19 pandemic, new data suggest that households might struggle to cushion the blows of inflation and a recession.

Merk Investments’ numbers suggest that the $2.6 trillion created in excess savings in 2020 and 2021 combined are beginning to be withdrawn. The monthly savings pace is also below pre-pandemic levels.

Consumers aren’t optimistic about this economy, as the University of Michigan’s Consumer Sentiment Index collapsed to just higher than 50 in June, much lower than the market estimate of 58.

Ultimately, the headline inflation data are proving that inflation is proving to be stickier than policymakers and the markets had anticipated.

The next key data print will be on June 14 when the producer price index will be released. The market is penciling in a 10.9 percent reading.

“Indeed, there is a risk that both fiscal and monetary policy will over-tighten and drive the U.S. economy into recession in 2023 or early 2024,” Nick Reece, a Portfolio Manager at Merk Investments, wrote in a research note.

According to the latest Atlanta Fed Bank GDPNow estimate, the U.S. economy is expected to grow 0.9 percent in the second quarter, representing another weekly decline in the regional central bank’s estimate.

In the first quarter, gross domestic product contracted by 1.5 percent.

A recession is technically defined as two consecutive quarters of economic contraction.