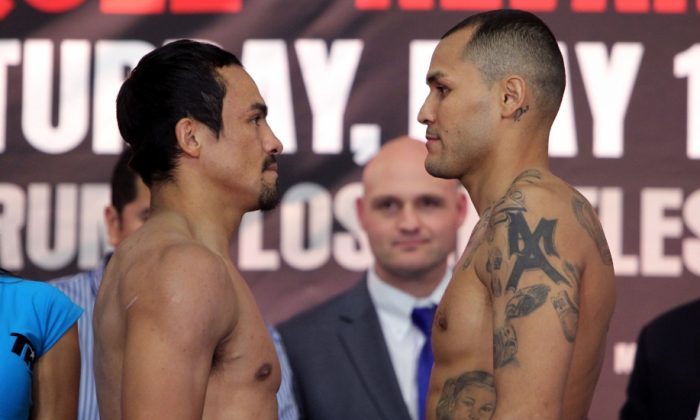 Juan Manuel Marquez (right) and Mike Alvarado (left) face-off after there May 16th weigh in.
News

After the Fight: Juan Manuel Marquez vs Mike Alvarado

The night started out with a 140 pound fight that featured the undefeated Viktor Postol (25-0-10) and Selcuk Aydin (26-2-19). The fight started off very good for the heavy handed Aydin. In the first round Aydin landed a very good left hook that stunned Postol, but after that it was all Postol. From the second round on Postol controlled the whole fight from the outside. Postol would sometimes land 8 to 10 punches that would go completely unanswered. Postol did amazing, he keep Aydin from coming inside, and also did very good bodywork that may have taken Aydin’s power away. In the 8th round it looked as if Aydin may have found something to work off of, landing great body shots that looked to have hurt Postol. When the 9th round came around Aydin was unable to get inside and Postol did much of the same; controlled the fight on the outside with amazing combinations and body work.

When the 11th round came around Aydin was deducted one point for rabbit punches (hitting the back of the head). Seconds after that Postol stopped the fight with a clean right uppercut that knocked out Aydin. Postol in my opinion would have won this fight with his superior boxing ability, but he decided to end the fight himself, leaving the decision out of the judge’s hands.

The main event, Juan Manuel Marquez (56-7-1-40) vs Mike Alvarado (34-3-23), turned into a great fight. The first seven round of this fight was all Marquez. Marquez was able to control the fight with his superior hand speed, his straight right hand, and his outstanding counter punching. In my opinion in those first seven rounds Alvarado was showing Marquez way to much respect. After the third round Alvarado should have stopped trying to box, and should have attacked Marquez by getting inside and start exchanging punches with him. Alvarado did exactly that in the eighth round.

When round eight came around Alvarado started to press Marquez, but that led to him getting caught with a straight right hand that sent him flying through the ropes. What that knockdown did was change the complexion of the fight. Alvarado came out in the ninth round and caught Marquez with a hard right that sent him to the canvas. From that point on this fight turned into a great match.

Alvarado and Marquez from the eighth round on competed in a fight where hard shots were landed and amazing exchanges took place. With that being said Marquez was still able to win most of those rounds with his counter punching and his great straight right hand. Juan Manuel Marquez showed in this fight, that even a the ripe age of 40 years old he can still compete at a high level. Mike Alvarado showed heart, he took Marquez’s best and stood toe to toe with a legend, and a future Hall of Famer. Juan Manuel Marquez vs Mike Alvarado was a fight, a fight that was great for the sport, and a fight that was great for boxing fans around the world.