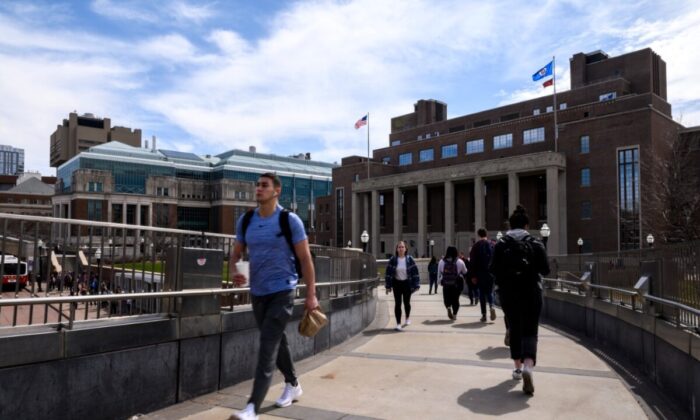 Students walk on the University of Minnesota campus in Minneapolis on April 9, 2019. The university closed its Confucius Institute in 2019. (Stephen Maturen/Getty Images)
Viewpoints

After the Exit of Confucius Institutes, Taiwan Can Help

The U.S. State Department announced last August that Confucius Institutes established by the Chinese Communist Party (CCP) in the United States after 2004 would be required to register as foreign missions. Then in October, Mike Pompeo, secretary of state at the time, said he was hopeful that all Confucius Institutes on U.S. campuses would be closed by the end of 2020.

On Jan. 16 of this year, director of the American Institute in Taiwan, W. Brent Christensen, attended a Teaching Chinese as a Second Language conference in Taiwan and encouraged Taiwanese Chinese teachers to step forward and help “fill this gap” left by closed Confucius Institutes.

“We have all read news stories about the closing of many of the PRC’s Confucius Centers in the U.S. Now is the time for Taiwan to step forward and help fill this gap—not only to teach Mandarin and learn English, but to more fully tell Taiwan’s story to their American students,” Christensen said, referring to those in the Fulbright Foreign Language Teaching Assistant Program who will go to the United States to teach Chinese to Americans.

The Confucius Institute traces its genesis to1993 when Chinese scholar Wang Huning introduced the concept of “soft power” to China, a term coined in 1990 by the well-known professor of international relations at Harvard University, Joseph Nye. At that time, Wang published the article “Culture as a National Power: Soft Power,” emphasizing that the wide spread of a country’s culture would bring great power to that country.

In 2007, then-CCP leader Hu Jintao officially put forward the strategic layout of “improving the country’s cultural soft power” during the Party’s 17th National Congress. Subsequently, Confucius Institutes sprang up all over the world, shouldering the task of enhancing the Chinese communist regime. At their peak, there were over 500 Confucius Institutes and 1,000 Confucius Classrooms in more than 160 countries.

But Confucius wasn’t always so popular with the CCP. In its early days, the Party severely criticized the revered philosopher and sage, contrary to long-standing tradition, and praised China’s cruel first emperor Qin Shi Huang. In May 1958, Mao Zedong said in a sarcastic tone at the second plenary session of the CCP’s Eighth Central Committee: “Qin Shi Huang only buried alive 460 Confucian scholars, while we buried 46,000.” During the Cultural Revolution, there was a three-year campaign focused on criticizing Confucius and Confucianism.

The Party line was later changed to one of “respecting Confucius,” and investments were made to widely establish Confucius Institutes in various countries. However, due to the CCP mindset of “power comes out of the barrel of a gun,” whether criticizing Confucianism or respecting Confucianism, it has nothing to do with Confucianism—Confucianism only serves as a tool and means to rule and control the people. Therefore, when Chinese students fought for freedom of the press, freedom of speech, and democracy in Tiananmen Square in 1989, the second and third generations of CCP leaders could simply ignore the Confucian precept of virtue, as well as international public opinion and government concerns. Thousands of Chinese students and civilians were killed by the army in full view of the world.

The CCP’s reason behind establishing the Confucius Institute was merely to use Confucius’s name and his advocacy of moral and ethics norms to make itself look good, all the while suppressing freedom of ideas, consolidating political power internally, and controlling speech externally.

This behaviour is further intensified by fifth-generation leader Xi Jinping, who came to power in 2012. The Beijing regime has become increasingly authoritarian, including increasing levels of ideological indoctrination and control. The original “soft power” intent of spreading language and culture through Confucius Institutes was transformed into what the National Endowment for Democracy called “sharp power” at the end of 2017.

Thus, instead of using China’s language and culture to win hearts and minds of other countries through attraction and persuasion, the CCP spies on specific countries and engages in unlawful subversive activities. Not only does it openly infringe on the academic freedom of other countries’ higher education through cultural means—triggering the closure of many Confucius Institutes in the United States, Canada, Australia, France, Sweden, and other countries—but it also blatantly uses inducement, financial aid, pressure, intimidation, and other such methods to intervene in the internal affairs of other countries with the purpose of suppressing speech and manipulating ideology abroad, especially that of Chinese expatriates.

The exit of Confucius Institutes on American campuses signifies the beginning of the gradual recovery of teachers teaching authentic Chinese all over the world to participate in and support the learning of traditional Chinese with practical actions. Taiwan possesses three distinct advantages in this regard: the preservation of traditional Chinese culture, the use of Chinese as the official language, and a free and democratic system.

In the United States alone, there are 365 weekend traditional Chinese schools and 7,155 Chinese teachers, who can instruct more than 400,000 students in a timely manner. The Taiwanese teachers in overseas Chinese schools in various countries can also share teaching skills and learning experiences. In addition, Taiwan offers quite a wealth of digital learning platforms, high-quality Chinese textbooks, various long- and short-term Chinese classes, as well as international exchanges and competitions, which can satisfy Chinese language and culture lovers of different learning levels and needs.

Countries around the world have the right to promote their culture, values, political ideals, and foreign policies so long as they do so through internationally accepted means of open engagement and persuasion, what is often referred to as “soft power” or “public diplomacy.” As early as 1883, France created the Alliance Francaise, and later there was the British Council, Germany’s Goethe-Institut, and so on.; Taiwan also set up the Taiwan Academy in 2011. Recently, members of Congress have even proposed a “Formosa Academy” or “Formosa Center,” whose main purpose would be to encourage Chinese schools in the United States and around the world to teach traditional Chinese characters and authentic Chinese culture.

At a time when the CCP’s Confucius Institutes are gradually leaving the scene in various countries, it opens the door for the transition of Chinese schools to become community Chinese-language learning centres, encourage teachers of overseas Chinese schools to earn credit and teach in primary and secondary schools of the host countries, and promote industrial co-operation between overseas Chinese schools and Taiwan Chinese-language teaching institutions. All these will demonstrate the spirit and practical action of “Taiwan can help” in Chinese learning!

Michael Sun is the director of the Cultural Centre affiliated with the Overseas Community Affairs Council in Toronto.