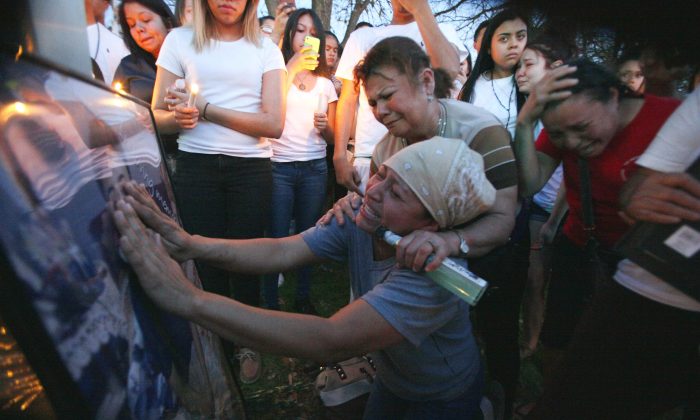 In this March 14, 2016 photo, Ana Henriques places her hands on a portrait of her son Jose Cruz, 16, as she is consoled by friend Norma Velasquez during a candle light vigil for her son, who was shot by an off-duty Farmers Branch police officer, outside a Shell gas station where the shooting occurred in Addison, Texas. (Ben /The Dallas Morning News via AP)
Crime and Incidents

ADDISON, Texas—An off-duty suburban Dallas police officer who fatally shot a 16-year-old and wounded another juvenile was arrested Wednesday on charges of murder and aggravated assault, authorities said, while a funeral service for the teen was underway.

Farmers Branch officer Ken Johnson was taken into custody Wednesday night by Addison police officers and was being booked into Dallas County Jail.

The shooting happened Sunday evening at a gas station in Addison. Officials have said that Johnson saw a vehicle being burglarized in his apartment complex parking lot and that he gave chase when the suspects fled. After the suspects’ vehicle spun out about a half-mile away, an altercation led to the shooting.

Jose Raul Cruz was killed and the other juvenile, who also was shot, was hospitalized. Cruz’s family held a funeral Wednesday night.

Johnson’s attorney, Chris Livingston, has said he feared for his life. Livingston could not be immediately reached Wednesday to speak on Johnson’s behalf.

Authorities have not said whether the juveniles were armed. Johnson was not injured.

Addison police Chief Paul Spencer said in a statement Wednesday that there was “probable cause” to arrest Johnson but that the investigation will likely take several more weeks.

Cruz’s cousin, Nora Rubi, said that she was happy that Johnson had been arrested.

“When I first heard about it, I was crying nonstop. I thought it was a joke,” she said.

Farmers Branch police spokesman David Laisure declined to comment Wednesday, deferring to Addison police. Spencer previously has said that Johnson had no disciplinary record. He also noted that department policies do not allow off-duty officers to chase suspects in their own vehicles.

According to the Texas Commission on Law Enforcement, Johnson has worked for Farmers Branch police for a year. He worked as a peace officer for Dallas Area Rapid Transit for almost eight years before that.