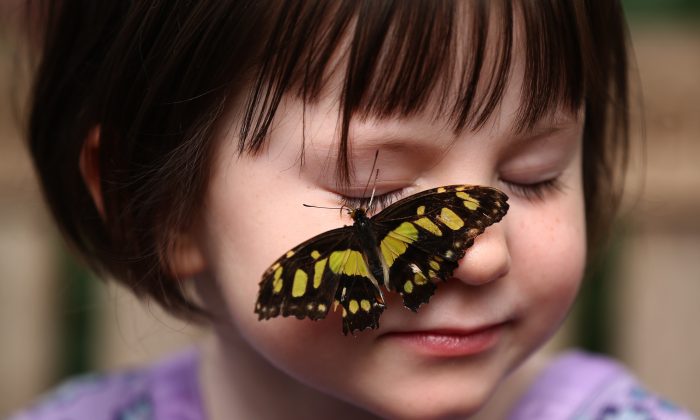 Malachite butterfly lands on the face of a girl during a photocall to highlight the forthcoming 'Sensational Butterflies' exhibition at the Natural History Museum on March 31, 2015 in London, England. (Carl Court/Getty Images)
UK

A British naturalist and television presenter is calling for research into the decline of the country’s butterflies.

The call for action came after a State of Britain’s Butterflies report four years in the making from the Butterfly Conservation and the Centre for Ecology & Hydrology that revealed that more than three-quarters of the country’s 53 butterfly species have declined over the last 40 years.

“It points to the fact that there’s something significant that we’re missing,” Packham said. “I think personally it’s the over-use of a broad spectrum of insecticides and then neonicotinoids thrown into the mix since the 1990s. This is an urgent, clarion call to academics to get into gear and find out what is causing these declines.”

Packham told the Daily Mail that the report shows that the future of the butterflies can get better, as the research shows conservation efforts have worked.

Indeed, a few species have even become more prolific over the past decades.

The study featured tens of thousands of volunteers counting butterflies across the country each year.

“Overall the situation is stark. Most butterflies have decreased since the 1970s and an alarming number of common species have declined severely,” said Richard Stark, the lead author of the report.

“On the other hand, trends over the past decade provide grounds for optimism and show that our approach to conserving threatened butterflies can stem and even reverse declines.”