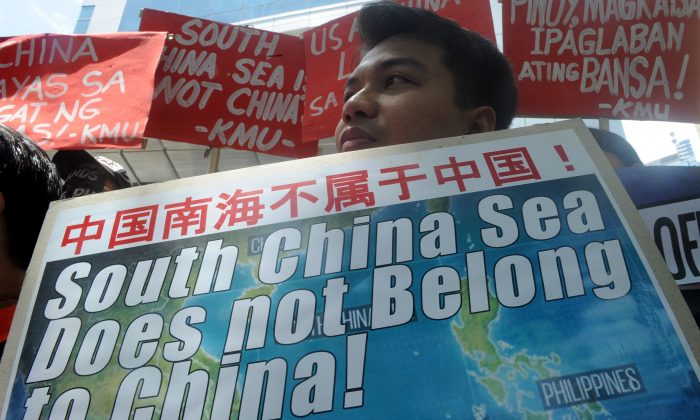 Activists hold a protest in front of the Chinese Consular Office in Manila, Philippines, on July 7, 2015, against China's claims, construction activities, and military build-up on the South China Sea. (Jay Directo/AFP/Getty Images)
China

The ruling in favor of the Philippines in the South China Sea disputes on July 12 has met with heated rejection from the Chinese state and state-controlled press. Military-style alerts have been issued in Beijing and the internet is awash with jingoistic comments deriding the international court and the Philippines.

However, there is another strain of online public opinion: bemusement at how the matter of who controls distant rocks and atolls suddenly assumed a mantle of national significance. For these members of the public, there are more important things to worry about.

Xinhua, China’s state-run news agency, ran an article with the headline “South China Sea Ruling: A Clumsy Farce by Those Harboring Nefarious Designs.” Unsurprisingly, the text derided the arbitration as an anti-Chinese drama and described Benigno Aquino III, former President of The Philippines, as a “pawn” in an “American scheme.”

A cartoon published by Xinhua shows a big-nosed Uncle Sam controlling an angry Filipino puppet from behind a screen showing a tropical sea, while a sinister-looking Japanese in antiquated costume and wearing samurai swords applauds effetely in the background.

In Beijing, Communist Party authorities issued an emergency notice that called upon officials in various Party organs to be on “war alert” from 8 in the morning of July 12 until midnight on July 17. Party officials on duty were told to remain at their posts at all times during the day.

In the U.N. tribunal’s ruling, China’s claims to virtually the entirety of the South China Sea were dismissed by the 5-member tribunal as having no historical basis. It was also determined that the multiple artificial islands that have been built by and used as bases by the Chinese military do not constitute territory entitled to zones of economic exclusivity. Rather, they were found to be in violation of the sovereignty of the Philippines.

An article by the official web publication of the Chinese military, 81.cn, said that the ruling was “frivolous, careless and irresponsible” because of the five court ruling officials, four were European. It claimed the ruling was a “magic mirror” that exposed the ulterior motives of “certain parties to create chaos in the region.” (China’s official sources failed to note, however, that due to China’s refusal to participate in the process, it forfeited the opportunity to influence the composition of the justices.)

Meanwhile, the Xinhua piece directed a rebuke at the U.S. for trying to “undermine Chinese sovereignty in the South China Sea, driving a wedge between China and neighboring states, defaming China’s image, and forcing China into a passive role in international relations.”

China is a signatory of the United Nations Convention on the Law of the Sea, making it legally bound to the tribunal’s judgement, as analysed by East Asia Forum.

Online, a flood of nationalistic comments denounced The Hague’s decision and bashed the Philippines and others perceived to have wronged China.

One outburst, titled “The Motherland Calls,” harangued netizens for only complaining about the ruling in words without taking any physical action. It seemed that the post was meant as a jibe, perhaps trolling those who are taking the decision too much to heart.

“My compatriots, your motherland has raised you. Are you unwilling to sacrifice one finger? Does your patriotism amount only to sharing pictures with friends on social media? Do you want the world to look down on us? Show some bravery! Please cut off one of your fingers and bring it to the Party office tomorrow at 10 a.m.”

The commentator wrote that if one million severed fingers were received within 10 days, the court might reverse its ruling.

Others seemed genuinely inflamed. A post from Fujian Province reads: “Even such a small country [the Philippines] dares to push China around. … If Mao and Deng were here, we would have gone to war already.”

Another belittling comment says: “The banana-sellers should just keep selling bananas and stop thinking about my fish. I won’t give them to you, even if you bring your American daddy.”

In the real world, though, public enthusiasm over the South China Seas dispute would seem disappointing to those ready to mutilate themselves.

According to a 2014 survey organized by Andrew Chubb, a scholar of China’s maritime disputes, some 1,400 people in the cities of Beijing, Shanghai, Guangzhou, Changsha, and Chengdu expressed far more concern over domestic issues like corruption, the gap between rich and poor, and even social practices and moral issues as compared with sovereignty over disputed islands and rocks.

One comment on social media made a jab at the urban law enforcement officials, known as chengguan, who are infamous for petty brutality: “Summon all the chengguans! Prepare them to serve their country at the frontline!”

While respondents generally agreed that the islands were a matter of national dignity, most felt that military conflict over the disputes were not in China’s interests and favored diplomatic solutions.