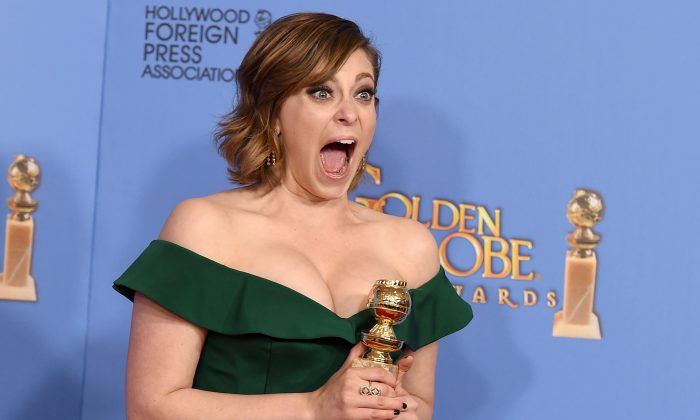 Rachel Bloom poses in the press room with the award for best actress in a TV series, comedy or musical, for her role in "Crazy Ex-Girlfriend" at the 73rd annual Golden Globe Awards in Beverly Hills, Calif. on Jan. 10. (Photo by Jordan Strauss/Invision/AP)
Entertainment

After Snub, Rachel Bloom Still Crazy Excited for the Emmys

LOS ANGELES—Rachel Bloom started the year with a Golden Globe win for her starring role in the CW sitcom “Crazy Ex-Girlfriend.” A week later, she added a Critics’ Choice Award to her mantle.

So, a 2016 Emmy nomination for lead actress in a comedy series seemed within reach.

“It was a bummer,” Bloom acknowledged in a recent interview. “But,” she continued, “the fact that I was even in the conversation, on the short list to get any nomination, is unbelievable.”

Those awards will among those presented at Saturday’s Creative Arts Emmy Awards ceremony, which, unlike next weekend’s prime-time show, in general celebrate technicians and others working behind the scenes.

“Crazy Ex-Girlfriend” casts Bloom as a New York lawyer, Rebecca, who, on a whim, abandons her posh but miserable existence to be with the love of her life, Josh (Vincent Rodriguez III).

Problems are that her so-called “love” was a decades-old summer-camp crush who is engaged to another woman and now lives in West Covina, California. And when Rebecca arrives, Josh has no idea why Rebecca is really there.

“I really miss that old-school television opening with a song telling you what the show is going to be, because it seems kind of cheesy and outdated,” Bloom said.

Her nominated song is “Settle for Me,” a Cole Porter-esque ballad (co-written with Schlesinger and Jack Dolgen), which places Rebecca and Josh’s best friend Greg (Tony nominee Santino Fontana) in a lavish recreation of a Fred Astaire and Ginger Rogers movie-musical production number. “A dream come true,” Bloom said of creating that sequence.

The 29-year-old Bloom has actually been down the Emmy road once before, as a 2015 nominee for co-writing the short-form ‘toon “Robot Chicken.” (The comic-fantasy “Adventure Time” took home the statuettes.) So, this time, she’s ready. Her date is husband, actor and show consultant Dan Gregor.

“Rachel wakes up,” she replied. “Everyone who’s nominated on the show and their date is coming to my house for a nice brunch spread while we ladies get their hair and makeup done. We have a 10-person limo booked for the ‘Crazy Ex-‘ crew, so it’s going to be like adult prom.”