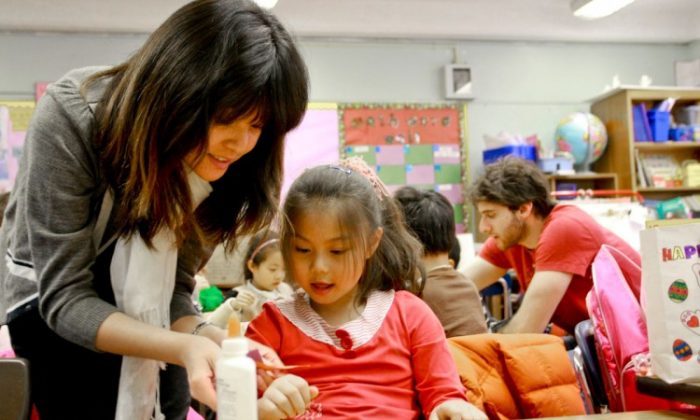 A student makes crafts at Open Sight, an afterschool program at P.S. 2 in Chinatown, which teaches Chinese children about the many different cultures in New York City outside of Chinatown. (Tara MacIsaac/The Epoch Times)
US

NEW YORK— A Nov. 28 Addendum proposed by the Bloomberg administration drops funding to just under $70 million for the 2013 year, a cut of $20 million from this fiscal year and $47 million cut from the start of the Out-of-School Time (OST) program two years ago, according to a news brief from The Center for New York City Affairs.

Programs will cost more per student because of more stringent requirements in the Addendum, according to Cathleen Collins, deputy chief of staff at the Department of Youth and Community Development, which distributes funding for the OST program, reports the news brief.

After-school and summer programs are the latest education sector to face budget cuts after 672 education employees were laid off in October. Reduced budgets have forced schools to take action, including compounding classes and additional layoffs.

According to a slew of reports this year focusing on the relationship between funding and education, the availability of resources deteriorated quickly from just a few years ago.

For instance, in November the Alliance for Quality Education released “Back to Inequality: How Students in Poor School Districts are Paying the Price for the State Budget.”

It found that in poor districts a cut of $843 per student equaled about $21,000 per classroom—more than triple the size of cuts in wealthy districts.

Approximately 46,000 slots for youth in after-school programs, or “Out of School Time” (OST), were lost over the past four years due to $8.5 million in budget cuts, according to Kevin Douglas, policy analyst for United Neighborhood Houses.

A Policy Studies Associates (PSA) Report from March examined the first five years of 10 after-school programs, and found that students participating in them say they are more apt to “always” want to do well in school, always do their homework, and work hard to do their best in school.

Outdoor activities, homework help, and healthy snacks are provided during these free programs, giving parents an opportunity to work a full day during the school year and summer while their kids are in a safe environment.

More than eight-tenths of kids said they felt safe all or most of the time in the PSA Report.

In addition, college and high school students were hired for more than 60 percent of the programs. One college student said that if the students are dealing with issues, “then I or another staff member will take them aside to see if they want to talk about it.”

The one-on-one interaction may have been why 72 percent of participants reported to PSA that they felt happy all or most of the time in their program.