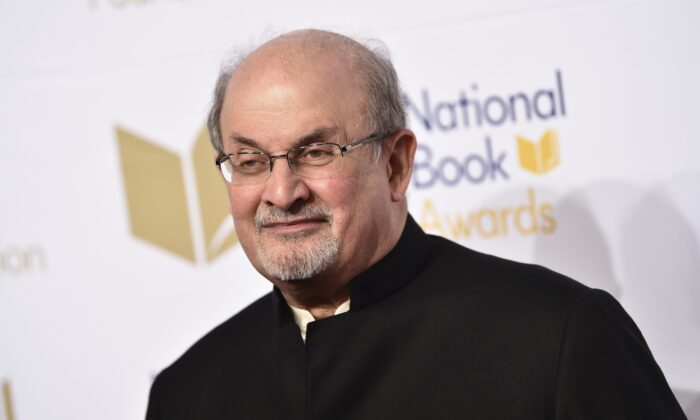 After Rushdie Attack, Anyone Who Wants to Continue Iran Nuclear Deal Should Have Their Head Examined

Who could take seriously the endless negotiations and renegotiations of the Iran deal, also known as the Joint Comprehensive Plan of Action (JCPOA)?

They were always a masquerade that played into the hands of the mullahs, allowing them more time for covert research in their campaign for nuclear weapons. All nations, starting with the United States’ Manhattan Project during World War II, have conducted their nuclear research in a clandestine manner, as far from prying eyes as possible.

To think that Iran, of all nations, wouldn’t do the same defies credulity. In fact, after Israel’s Mossad smuggled an astonishing ton of nuclear weapons planning documents and computer disks out of a Tehran warehouse, only a deliberate liar could pretend the mullahs weren’t hellbent on obtaining such weapons and their delivery systems, despite whatever they said or whatever they signed.

Of course, there were plenty of those deliberate liars, including the Europeans whose interest in the deal was always to provide cover for lucrative trade with Iran, as well as to obtain more of their oil supplies.

The Russians and the Chinese always saw Iran as more of an ally than a threat, so their participation in the JCPOA was even more of a masquerade, much in the way they have pretended to be concerned about “climate change.” Indeed, China is a significant purchaser of Iranian oil, and the Russians, of late, are reputed to be trading advanced weaponry with the Iranians, their latest Sukhoi jets for Iran’s surprisingly sophisticated drones.

Former President Donald Trump—the real estate developer who turned out to be something of a foreign policy genius just by applying the common sense sorely lacking in so-called experts—pulled out of the JCPOA and applied sanctions. But the moment that Joe Biden was installed as president, the John Kerrys of the world were—at taxpayer expense—back on their private jets for another week of pointless jawing with the latest “moderate” Iranian spokesperson at a five-star hotel.

Lately, these discussions have been going even more poorly, for the obvious reason that the Iranians have no interest other than stalling while they go about their work. It’s worth noting that many details of the previous deal were hidden from the public, undoubtedly because they were so favorable to Iran, especially where inspections were concerned.

But now, we have the murderous attack on author Salman Rushdie to remind us exactly what the Islamic Republic is actually like.

The attacker was obeying Ayatollah Khomeini’s 1989 fatwa (Islamic legal ruling) against Rushdie that has never been revoked in the intervening 33 years. The ruling is summarized in Dr. Andrew Bostom’s always useful blog:

“I am informing all brave Muslims of the world that the author of ‘The Satanic Verses,’ a text written, edited, and published against Islam, the Prophet of Islam, and the Qur’an, along with all the editors and publishers aware of its contents, are condemned to death. I call on all valiant Muslims wherever they may be in the world to kill them without delay, so that no one will dare insult the sacred beliefs of Muslims henceforth. And whoever is killed in this cause will be a martyr, Allah willing.”

You have to say this for the original ayatollah—he didn’t mince words or cloak them in deliberately ambiguous diplomat-speak.

And lest you think this is something from the distant past, as of Feb. 14, 2019, the new leader, Ayatollah Khamenei, posted the following on Twitter, social media’s best home for fascist dictators, religious and otherwise, and where Trump isn’t allowed to post. Free speech for terrorists, but not for thee.

Under the Khamenei.ir account, “Imam Khomeini’s verdict regarding Salman Rushdie is based on divine verses and just like divine verses, it is solid and irrevocable.”

Since the dastardly act at the Chautauqua Institution, Iran has “‘categorically’ denied any link with Salman Rushdie’s attacker—instead blaming the writer himself,” according to the BBC. The Beeb further noted that “Iranian media have extensively commented on the attack, calling it ‘divine retribution.’”

Secretary of State Antony Blinken called the attack “despicable,” which, of course, it was. What will he do?

Isn’t it time finally to pull out of the JCPOA part and parcel? Who could possibly believe that the Islamic regime would negotiate in good faith and then follow the agreement faithfully?

Nevertheless, my guess is that Biden & Co. won’t. They will continue to pay at least lip service to the deal. To do otherwise would be admitting that Trump was right all along, at the very moment they are, via an increasingly Gestapo-like FBI, making every effort to make sure the former president never runs again. That’s more important to the Democratic leadership than the mullahs having the means of mass destruction.

As far as the Islamic Republic is concerned, the Israelis, at least for now, are on their own.

On a personal note, I met Rushdie myself in the early ’90s, when I was president of the PEN America Center West. (I doubt he would remember.) The fatwa was already in place, and we were doing our best then to defend Rushdie, although writer’s organizations have little power. Over the years, his struggle has faded from view for the most part, with freedom of speech under attack from so many quarters now, particularly the left.

So I was shocked when I heard what had happened to him. Like all of us, I assume, I wish Rushdie a speedy recovery and am pleased to hear he’s now off a ventilator and able to speak.